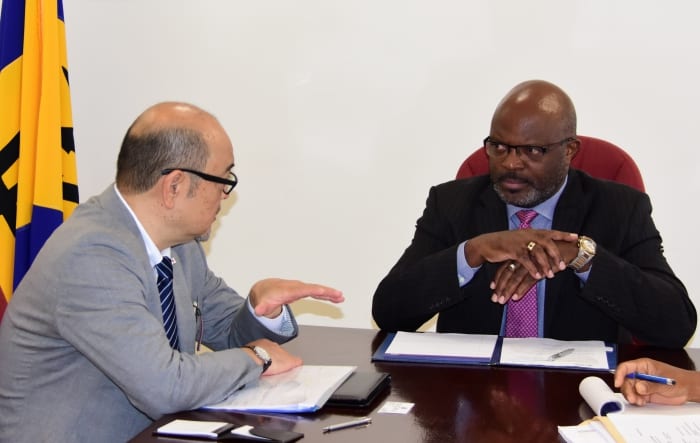 Attorney General and Minister of Home Affairs, Adriel Brathwaite, listens attentively to Japan’s Ambassador to Barbados, Teruhiko Shinada during a courtesy call today at the office of the Attorney General. (C.Pitt/BGIS)

Japan is willing to lend its expertise to help Barbados improve its disaster management, so as to allow the island to recover in the shortest possible time after a major disaster.

Japan’s Ambassador to Barbados, Teruhiko Shinada, gave this undertaking today during a courtesy call on Attorney General and Minister of Home Affairs, Adriel Brathwaite, at his office in Webster’s Business Complex.

Ambassador Shinada disclosed that his country had experienced many natural disasters, and was happy to collaborate on any area of disaster management as identified by Government.

“Japan is one of the countries that have suffered the effects of many natural disasters such as earthquakes, tsunamis and typhoons, so we have quite a lot of experience in the damage [that is caused by these disasters] and we have the knowledge and experience that we can share with Barbados,” he stated.

Additionally, the Ambassador also mentioned that disaster experts from Japan would be visiting Barbados in 2018 to assist the Caribbean Disaster Emergency Management Agency (CDEMA) with its capacity building efforts. He pointed out that the experts’ work would not be limited to Barbados alone, but would also involve other countries in the region.

In turn, the Attorney General welcomed the gesture of assistance with disaster management from Japan, adding: “We look forward to any assistance for CDEMA and for Barbados in disaster management.  You do have my commitment that we will do all that we can to ensure that this [collaborative effort] occurs.”

Ambassador Shinada also disclosed the provision of approximately US $1 million in equipment grant aid, in collaboration with the Department of Emergency Management. He explained that the funds would go towards the procurement of disaster damage management equipment – some of which should be in the island as early as the last quarter of the year.

The two officials also discussed areas of cooperation in culture and sports and possible assistance with water harvesting or other water conservation techniques.