Japan Pledges Its Support For SIDS 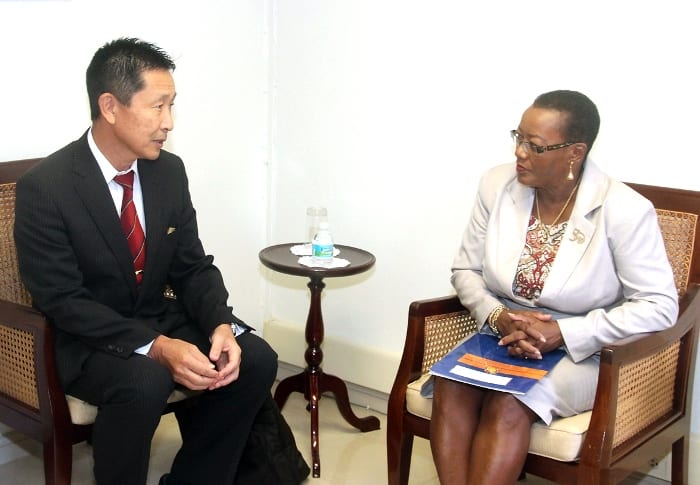 Minister of Foreign Affairs, Senator Maxine McClean in discussion with Japan’s Ambassador to Barbados, Mitsuhiko Okada, during a recent meeting at the Ministry. (C.Henry/BGIS)

He made his position clear when he paid a farewell courtesy call recently on Senator McClean at her Culloden Road office.

During the wide-ranging discussions, the Ambassador noted that Barbados and Japan shared a bond as it related to SIDS and the vulnerabilities they face. He also expressed the hope that the two countries could continue to work closely on the matter of climate change.

While thanking Mr. Okada for his continued support, the Minister of Foreign Affairs pointed out that the issue of climate change was “major,” and added that she looked forward to Japan’s continued cooperation.

The two officials also touched on the issue of the Security Council Reform, which was featured on the agenda at the last conference of Heads of Government of CARICOM.

She also stressed the importance of focusing on citizen security, most notably terrorism, and highlighted its negative impact on countries throughout Europe.

The renewable energy sector also came in for discussion, with Senator McClean pointing out that Government was taking the lead in this area as “any conversion to renewable energy would benefit Barbados”.