Jones: 6th Forms Not About Competition 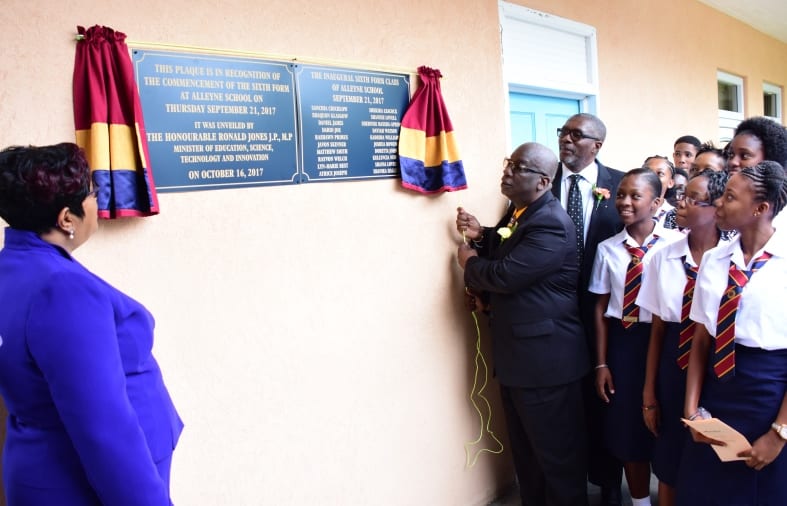 Minister of Education, Ronald Jones, unveiling the plaque which signalled the commissioning of the new sixth form at the Alleyne School. Parliamentary Secretary in the Ministry, Senator Harry Husbands, Chief Education Officer, Karen Best (left), and students of the Alleyne School look on. (C. Pitt/BGIS)

Competition is not the motivator behind the increasing numbers of sixth forms across the island.

Education Minister, Ronald Jones stressed this yesterday at the commissioning of the new sixth form at the Alleyne School, where the first cohort was congratulated “for venturing into the unknown” in their selection of the institution at Belleplaine, St. Andrew.

“There is no competition. This is complementary work in education. This is giving our young people the opportunity to step forward and to be counted in a real way; to exhibit their excellence, the quality of their scholarship; their ability to be leaders in our society, leaders in our schools and leaders in our community,” the Minister said, as he complimented the school’s Board of Management and its leadership.

While stating he would recommend Alleyne as a school of choice, Mr. Jones encouraged the students to do what was “good”. Pointing out that there were people leaving school without qualifications as well as those who did not represent themselves appropriately when seeking employment, he said this brought a negative impression to the minds of the prospective employer.  He said youth must accept the harsh reality that nobody had to do anything for them.

The sixth form at Alleyne comprises 12 girls and eight boys, with Shaquan Glasgow having the distinction of being the first to enter the gates on September 21, when it opened for the academic year 2017-2018.

The students will pursue core subjects in management of business, entrepreneurship and communication studies, and will have electives ranging from art and design, environmental science and agricultural science.