Jones: Entrepreneurship The Way To Go 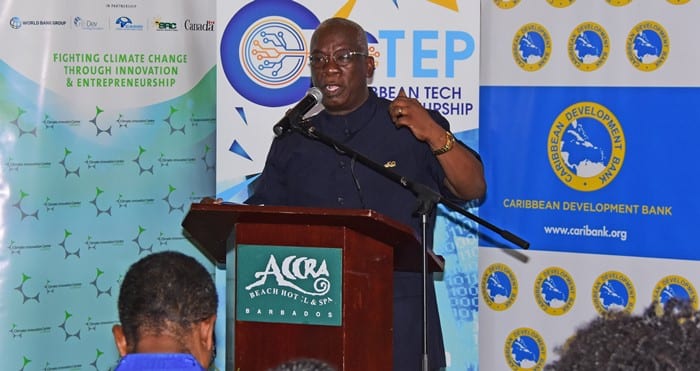 Minister of Education, Ronald Jones, speaking during the “Wrap Up Session” of a three-month incubation programme facilitated by the Caribbean Tech Entrepreneurship programme at the Accra Beach Hotel today. (C.Pitt/BGIS)

The days of being told to “learn and look for a job” are over.

Education Minister, Ronald Jones, emphasised this today as he addressed the “Wrap Up Session” of a three-month incubation programme facilitated by the Caribbean Tech Entrepreneurship programme (CTEP) at the Accra Beach Hotel.

Mr. Jones said: “We have to infuse in our student populations, from as early as we possibly can, [for instance,] the primary school system, the knowledge that they have the capabilities to work [and] to work beyond what their fore-parents were doing, that is, asking somebody for a job…”

While congratulating CTEP, its several partners and the winners of the CTEP competition, the Education Minister registered his concerns about the participation level of Barbadians in the regional competition that came at the end of the three-month exercise.

He stressed the region’s people had to look for opportunities and surmount new challenges, given that the whole revolutionary focus of utilising new technologies aimed to change the face of businesses.

He remarked: “We produce in the region some excellent products that are bypassed by those who import and those who shop; but we stack our shelves with everything else from everybody because of strictures and structures. And, until we start to change those dynamics basically we will remain hewers of wood and drawers of water.”

Meanwhile, CTEP’s Regional Coordinator, Troy Weekes said the programme was created to facilitate the movement of entrepreneurs from different stages within the life cycle of an entrepreneur namely idea, validation and revenue.

He noted that after segmenting the group of entrepreneurs in this manner, they were able to facilitate some 67 teams from across the region of the OECS, Barbados and Haiti with a significant portion coming from Haiti. The 67 teams, he added, comprised some 164 entrepreneurs.

Outlining some of the challenges, Mr. Weekes said they noticed that throughout the programme some entrepreneurs in some countries “participated a bit more than others”, and were, therefore, more aggressive in going after success and related prizes offered in the competition.

The virtual business incubation programme, an initiative of the World Bank Group, was supported by the Caribbean Development Bank. It was managed by the Caribbean Climate Innovation Center in Jamaica which is jointly led by the Scientific Research Council there and the Caribbean Industrial Research Institute based in Trinidad and Tobago.

Entrepreneurs also benefited from support given in technology-related workshops and mentors that helped them build their tech startups.

Its culmination in a regional final competition resulted in six winners (two from each stage). The winners in the Idea Stage were HIVE and DEV758 Solutions out of St. Lucia. In the Validation stage, the winners were: Caribonix, Dominica and KaribFusion from Antigua & Barbuda.

At the Revenue stage, the winners were Reneescentsationz, from Grenada; and EcoCaribe, a company in St. Lucia. Prizes for the winners include grants and access to the Branson Center for Entrepreneurship – Caribbean.