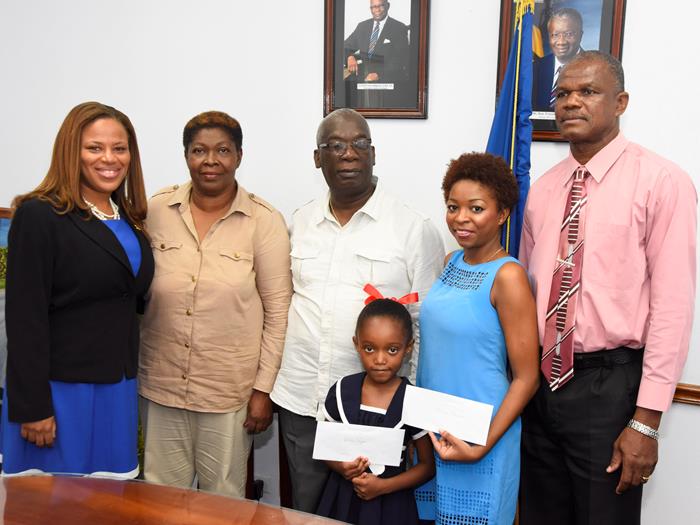 The featured speaker at the recent presentation of the 2016 Melanie Kristin Price Foundation scholarship, Minister Jones commended Yvette Oxley and Glyne Price for perpetuating their child’s legacy, while reaching out to young persons.

Mr. Jones recalled the type of spirit Melanie had, and said: “Even in the most difficult moments that spirit shone through. It is therefore quite heartening that her parents would, in order to perpetuate her name, but more than her name, her entire character and personality, set up this Foundation and so reach out to young persons.”

This year’s recipient is Dionna Browne, who will be assisted in completing her education at the Hugh Wooding Law School in Trinidad.

The Foundation also awarded Ariah Abigail Rogers, a pupil of the Rock Christian School, for academic excellence. Both were encouraged by the Education Minister to continue to persevere in their studies.

Melanie Kristin Price was a former student of the University of the West Indies, Cave Hill Campus; Hugh Wooding Law School; Queen’s College and Rock Christian Primary School, who lost her battle with cancer in 2014.

The Foundation’s stated aims are the welfare of children, including the prevention of cruelty to them, and the advancement of education in Barbados through, but not limited to, the provision of scholarships, bursaries, prizes and other awards.

Chairperson of the Foundation and Melanie’s mother, Yvette Oxley, stated that in finding the appropriate candidate, the Foundation aims to select someone who would have the kind of strength that Melanie embodied.

She reflected that Dionna’s perseverance and independence to achieve all that needed to be done in the midst of her own illness was reminiscent of Melanie’s spirit.

The first recipient of the scholarship award in 2014, Shelly-Anne Smith, was also in attendance and conveyed that although she never had the opportunity to meet Melanie, it was Melanie’s character and drive that provided the much needed motivation to help her to excel.

Ms. Smith, who successfully completed her Legal Education Certificate at the Hugh Wooding Law School, this year, thanked the Foundation for its “gracious assistance”.

Melanie’s mother congratulated both past and present recipients, indicating that her daughter would have given the “thumbs up” on those selected. She also expressed hope that the new awardees would go “beyond the best” in their future endeavours.