Jones: Lynch’s A Leader In Education 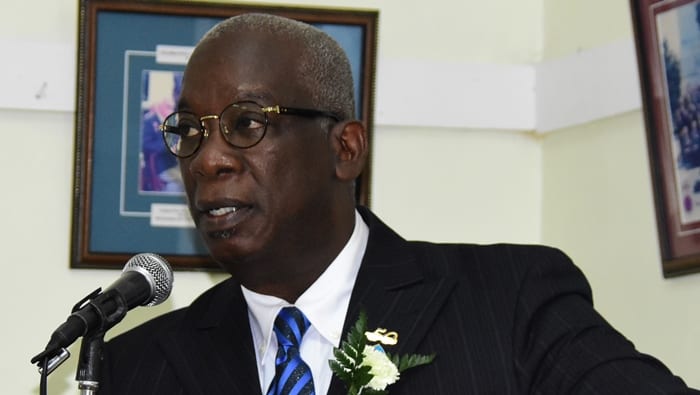 Lynch’s Secondary School’s [Green Lynch’s] contribution to the Barbadian landscape came at a time when secondary education was denied to a large swathe of Barbadian students particularly those who came from the very low working class, the middle class and the vulnerable in the society.

Education Minister, Ronald Jones, emphasised this last Saturday night, as he delivered the feature address at the Lynch’s Old Scholars’ Association’s dinner and gala ceremony at the Clock Tower, Garrison Savannah. Formed in 1886 by James Albert Lynch, it closed its door in 1991.

The Minister, noting the school’s impact on education, juxtaposed it with the establishment of other schools, namely Queen’s College in 1883; Combermere in 1881; and Alexandra in 1894.

He told the old scholars their school was embedded in history and was followed by another private secondary school, The Modern.

Mr. Jones pointed out that the school’s development, coming some 48 years after Emancipation to educate poor working class people with origins in Africa, was a great contribution to the island, and that Mr. Lynch should be commended for seeing the need to educate such persons of African ancestry.

Acknowledging there were a few public schools, like St. Leonard’s Boys’ and St. Leonard’s Girls Secondary, Princess Margaret and West St. Joseph in the 1950s, the Education Minister said the space had to be taken up by private educators, the majority of whom were of African origin.

Mr. Jones continued: “These were significant men and women at a time of scarcity of education at the highest level…. If your family was really impoverished, deeply impoverished, you became part of the plantation gang, picking pond grass.”

Lynch’s School closed after nearly 105 years in existence and under the tutelage of Mellis Gooding. The alumni heard she spent over 50 years in education, with 44 at Lynch’s and 15 of these as its principal. The remaining six years were spent as principal at the Gooding Private School.

Ms. Gooding was also said to have “fought for the recognition and support of the Government for private secondary schools in Barbados…integral partners in providing quality education for students who due to limited spaces were excluded from the established Government schools.”

The night saw Brenda Gaskin, the oldest living alumni of the school, being honoured. The Mellis Gooding Scholarship Fund was also launched in honour of the former principal, who was born in Carrington Village in 1927, and died on May 22, 2015.