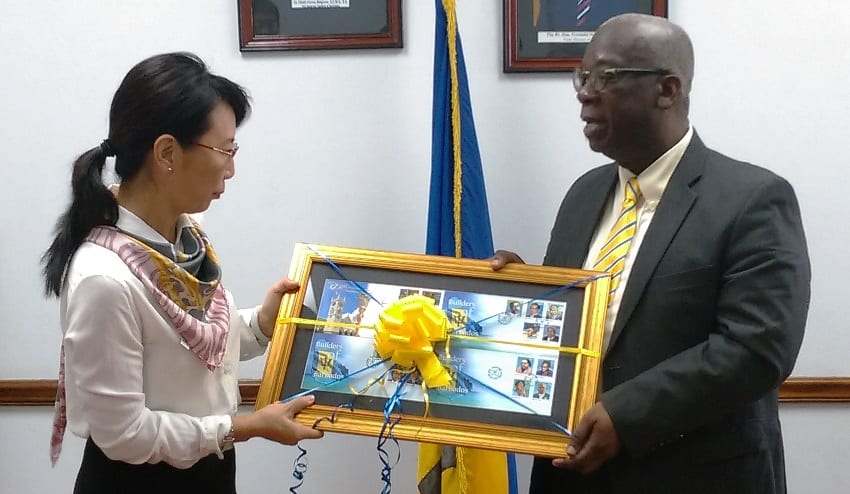 Minister of Education, Science, Technology, and Innovation, Ronald Jones presents a gift to China’s Ambassador to Barbados, Wang Ke, during her farewell call at the Ministry of Education today. (J.Weekes/BGIS)

During a courtesy call held in his Ministry’s conference room in the Elsie Payne Complex on Constitution Road, Minister Jones told the Ambassador that her three years and eight months in Barbados were very productive.

“We are disappointed that you are going… We as a Ministry are pleased. Our (education) system has benefited from your contact. We’ve benefited greatly from the work of your predecessors and of course from you,” the Minister said.

Minister Jones stated that the Ambassador’s presence in Barbados had been “quite impactful”.

“We’ve been able to accomplish much in education,” he said,  even as he admitted that the journey to bettering Barbados’ educational systems was not without its challenges, “sometimes we move a little too slowly” he noted when referring to some processes within government.

Following his comments, the Minister presented Ambassador Wang with a token of appreciation.  Thanking the Minister for his gift, the outgoing envoy said she was “happy” that the efforts in advancing the education system in Barbados have borne “abundant fruit”.

While she spoke highly of her experience working with the Ministry of Education and the Government of Barbados, the Ambassador did express some concern over the limited exposure of the Chinese Scholarships that are on offer for Barbadian students.

She was then assured that the Ministry would be implementing measures to raise awareness among students, thereby increasing the number of applicants for the scholarships.

Looking to the future the Ambassador expressed “confidence in the future of bilateral relations” between Barbados and The People’s Republic of China.