A red carpet welcome awaited Barbados’ 50 Jubilee Honourees as they arrived at Ilaro Court for the Prime Minister’s Dinner and Ball on Friday evening.

Prime Minister Freundel Stuart personally greeted the honourees on their arrival, and later publicly thanked them for the “rich and enduring contribution which they made to the development of Barbados over the last 50 years”.

During his short address, the Prime Minister noted that there was a tendency for some to act as though the island’s achievements were reached by those who held public office over the years.

However, he sought to dispel that notion, stating that: “There is a large number of Barbadians, unsung, who have contributed to all that Barbados is today in the year 2016. By the recommendation of their peers and their fellow countrymen, 50 honourees have been chosen for Golden Jubilee awards.”

Mr. Stuart told those present that the country could reflect on the last 50 years with profound gratitude for the resourcefulness and resilience of its citizens. “None but the unbelieving would want to believe that the decision to proceed to nationhood in 1966 was fully justified and all Barbadians are better off for it,” he pointed out. 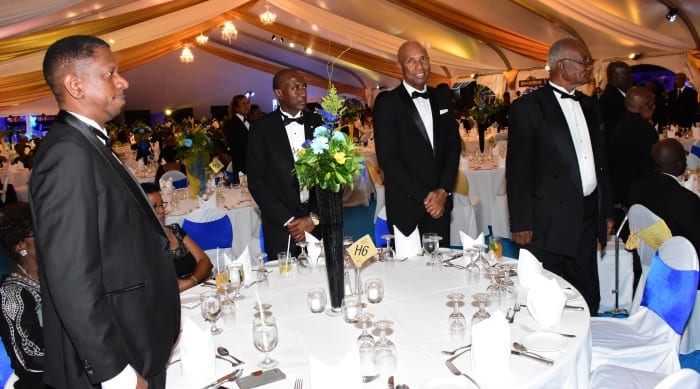 Describing the ball as one of the “iconic events” of the 50th anniversary celebrations, Mr. Stuart also recognised the presence of Barbados’ only surviving National Hero, The Right Excellent Sir Garfield Sobers.

“He is associated with these celebrations because while [National Hero The Right Excellent Errol Walton] Barrow and his delegation were at Lancaster House in 1966 negotiating, discussing and agitating for Barbados’ Independence, Sir Gary Sobers was in England, dominating the playing fields…and telling us all in his own language, the language which he spoke so eloquently through his bat and his ball, that we were ready for independence.

“Therefore his presence here this evening is a particular enhancement on this occasion,” he stated.

The Prime Minister also made special mention of the presence of Sir Philip Marlowe Greaves, the only surviving member of the delegation that went to England in 1966 to discuss, negotiate and agitate for Barbados’ Independence. “It adds a unique flare to this evening’s activities,” he remarked.

Among the evening’s honourees were businessman, Ralph “Bizzy” Williams; renewable energy advocate, William Hinds; surfer, Brian Talma; and former Cabinet Secretary, Avril Gollop. Those celebrating birthdays on November 30, particularly those born in 1966, were also applauded during the Dinner and Ball.

Persons attending last night’s event were treated to an evening of entertainment inclusive of modelling highlighting Barbadian fashion from 1966 to present.  In addition, there were dance presentations, and live performances by Krosfyah with Stedson “Red Plastic Bag” Wiltshire, Grynner and Mistah Dale.

The full list of recipients for the Barbados Jubilee Honour may be downloaded here.