Keeping Barbados Safe During The Storm 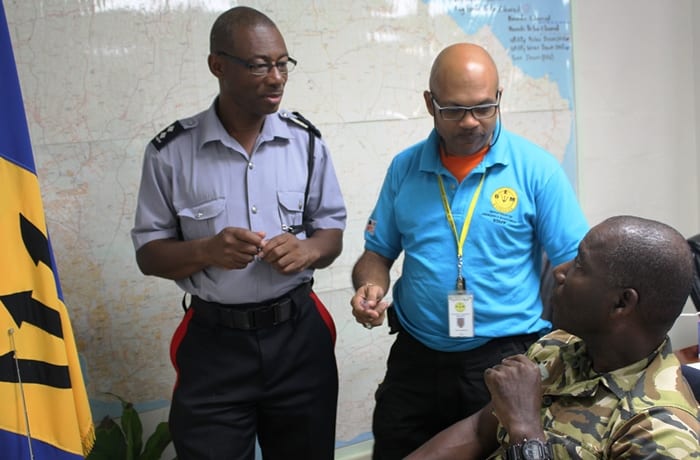 To captain a ship with a tropical storm churning in the Atlantic Ocean, complete with high winds and two possible ‘eyes’, may appear a daunting task for most. In fact, many a sailor would opt to haul their vessel out of the water.

But Police Inspector Fred Clarke, did not abandon ship when Tropical Storm Matthew came calling on September 28. In fact, he steered Barbados through the storm, a task he was trained for, and prepared to assume.

Inspector Clarke explained that the first thing he had to do in his role as the Operations Officer at the Department of Emergency Management (DEM) was to establish the resources needed to get the job done.

“I recognised what was key was harvesting the information from the various reports as quickly as possible and delegating the responsibility to the respective agencies,” he recalled.

And that he did. As reports came into the National Emergency Operations Centre (NEOC) established by the DEM, Mr. Clarke, flanked by Director of the DEM, Kerry Hinds, and acting Deputy Director, Captain Robert Harewood, began to make critical decisions.

It was his first time in the driver’s seat as the Operations Officer in the NEOC, but neither that fact, nor questions over his ability to steer the country through the storm, could detract him from the task at hand.

“I know I had the ability, and I felt honoured to be entrusted with the responsibility to demonstrate that I could be given such a task. And, with it being my very first time, it was like ‘this little Princess Margaret School boy taking over the responsibility for the island’. I wanted to succeed, and I wanted to do well on behalf of the Royal Barbados Police Force,” he said proudly.

Inspector Clarke’s confidence in his ability is supported by his experience in the disaster management field as the Force’s Tactical Advisor, and being the holder of an MSc in International Disaster Management from the University of Manchester in England.

His passion for disaster management was born as far back as 1986 during a police training exercise, code named ‘Operation Augustus’, which concluded with a hostage negotiation at Harrison Point, St. Lucy.

At the time, the Inspector recalled being in what was referred to at the time as the Forward Command Centre (FCC), and becoming intrigued with how the incident was managed.

With his interest now peaked, the lawman said he remained interested in the management of major incidents which police were often called upon to respond to throughout the years locally and regionally.

For the Inspector, these incidents at the local level included providing an initial response to the helicopter crash at Vault Road, St Thomas, and the cave in at Arch Cot, Brittons Hill, St. Michael, where he served as the Tactical Advisor to the Incident Commander.

At the regional level, Inspector Clarke served as the Logistical Officer for the Royal Barbados Police Force contingent that provided security for the 5th Summit of the Americas and the Commonwealth Heads of Government Meeting in Trinidad.

Additionally, he participated in the response team in St Kitts and Nevis following the passage of Hurricane Georges, and again in Grenada in the aftermath of Hurricane Ivan.

“Seeing the pictures of the levels of devastation and what could possibly occur was always in the back of my mind. So, I looked to see if something did occur, how I would transition from response to the recovery phase,” he said, making reference to how his experiences prepared him for Tropical Storm Matthew.

However, it was in 2005 when he was selected as the Contingency Planning Officer for the Royal Barbados Police Force in preparation for International Cricket Councils (ICC) Cricket World Cup 2007 that “put the icing on the cake” for him.

“I have not turned back since,” he stated. That assignment led to the creation of a contingency plan for the entire island.

“So, it was always in the back of my mind as to the type of action or responses that I could apply to any situation in Barbados,” he stated. Those situations, he said, could range from a hazmat incident, oil spill, terrorist attack, mass casualty or even an aircraft disaster.

“I was confident that based on my knowledge of the existence of such plans that I could easily operationalise the situation if it was required,” Inspector Clarke declared.

However, his training and expertise do not stop there. The lawman said he also worked as the Tactical Officer to the Venue Operations Centre (VOC) at all the Cricket World Cup 2007 events, and worked closely with all those other agencies involved.

“I also follow incidents and reports so that when and if I am called upon, I will be in a position to advise accordingly,” he said, noting disaster management was a broad area.

However, in Inspector Clarke’s opinion “Barbados is doing pretty well in resolving its emergency management issues”.