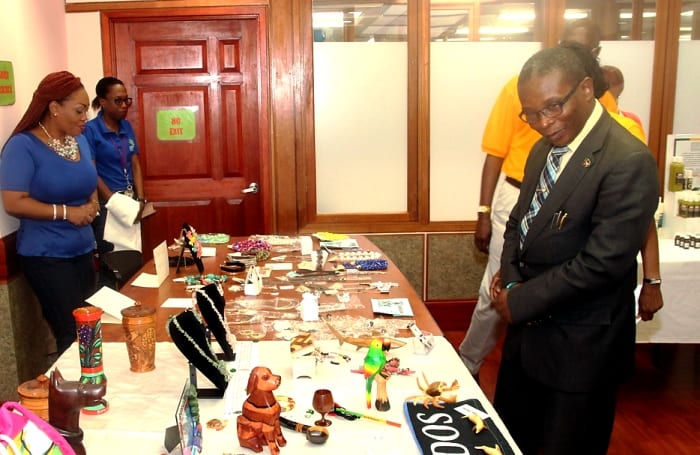 Minister of Housing, Lands and Rural Development, Denis Kellman looking at the work of some of the RDC’s clients during a recent showcase. (C.Henry/BGIS)

The last two decades has seen an evolution taking place in rural communities of Barbados, thanks to the existence of the Rural Development Commission (RDC).

Minister of Housing, Lands and Rural Development, Denis Kellman, expressed this view recently, as he lauded staff of the RDC during their 20thAnniversary Luncheon and Awards Ceremony at the Lloyd Erskine Sandiford Centre, Two Mile Hill, St. Michael.

The Minister said immeasurable service had been given through RDC’s programmes with respect to housing and repairs, roads, electrification, and through loans.

“We can proudly boast of our housing solutions, road construction, and especially the on lending of $11 million over to 1400 clients,” he said, praising the “committed staffers”, who were responsible for delivering the services to clients.

Acknowledging that RDC would continue to fulfil its mandate by bringing new projects to the fore, he disclosed that they had begun work on two community tourism-oriented projects in St. Lucy, at Stroude’s and Archer’s Bays, and discussions were ongoing with the Ministry of Transport and Works to develop another at St. Mark’s Church, in St. John.

“We are seeking to develop access to a natural cave there, so that tourists and locals alike can enjoy its beauty. There will also be space for community vending. Open spaces must be developed and used as economic zones, and we will develop areas overlooking places like the East Coast of Barbados and Lambert’s Hill to take advantage of the beauty of rural Barbados.  This will enhance our tourism product and industry and it will benefit the masses of people of Barbados,” the Minister stated.

Another project, which Mr. Kellman said RDC would embark on, as a matter of public safety and access, was the creation of a link road between Clinketts and Sutherland Hill, St. Lucy.

Stating that the application had been approved by the Town and Country Planning Department, the Housing Minister said it would also be used as access to higher lands, in case of a tsunami.

Acting Director of the RDC, Randolph Outram, in echoing similar sentiments, said RDC had made a substantial impact on the rural landscape where it operates and had “improved the lives of rural residents whether it was in providing housing solutions, roads, electrification or entrepreneurship development.”

The Commission celebrated its milestone under the theme RDC: Building on 20 years of Service and Development in Rural Barbados 1996-2016.