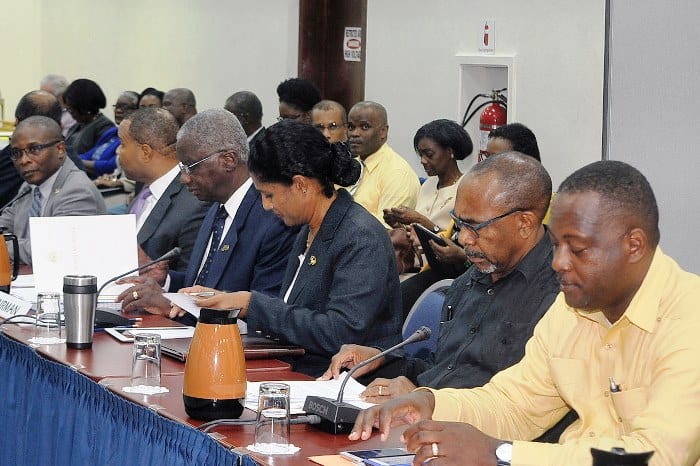 Prime Minister Freundel Stuart has identified “maturity, insight and faith in the future” as the key things which encouraged the social partners to stick together during difficult times.

Mr. Stuart made the comments today at a meeting of the full Social Partnership at the Lloyd Erskine Sandiford Centre.

The Prime Minister told the packed room: “The Social Partnership was put periodically under stresses of various kinds but the maturity, the insight and the faith in the future led all of the social partners to see the value of sticking together rather than allowing fissiparous or splintering tendencies to get the better of us.

“We are here this morning to consolidate that relationship and we therefore look forward to the spirited, frank and honest interventions of all who will participate in these deliberations.”

He noted that the Social Partnership was embarked upon at a time of national challenge, and for its full duration, the country had benefited greatly from the collaborative efforts of the private sector, the labour movement and the State.

Mr. Stuart continued: “I don’t think the tripartite dialogue has undergone stress as great as it underwent over the last few years when there were economic challenges facing the world, the region and Barbados. But thankfully, we have worked our way successfully, I think, through those challenges.”

Describing the agenda as “very useful”, he said he looked forward to a productive session. He noted that a meeting was originally scheduled for last May but some social partners had made representation that certain preliminaries had to be sorted out and gotten out of the way.

Chairman of the Barbados Private Sector Association, Charles Herbert, said his organisation saw the meeting as a collaborative one. “We intend to be here today not to throw stones at Government but to work with you to try and reach solutions to make Barbados better.

“Our presentations will not be political in that our goal is not to endorse or to change a Government but to work with the people’s representative,” Mr. Herbert told the gathering.

During the day, presentations were made on Government Finances and Foreign Exchange Reserves; the Ease of Doing Business; and Productivity and Engagement, among others.