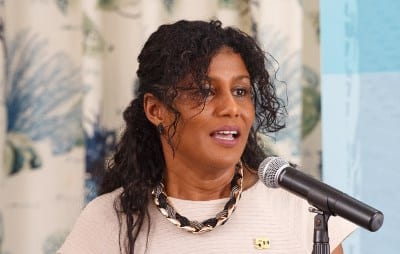 She made this recommendation recently during a courtesy call with President of the Barbados Association of Medical Practitioners (BAMP), Dr. Abdon DaSilva; and Director of the National Insurance Scheme (NIS), Ian Carrington, at her Warrens office.

Senator Byer Suckoo cautioned that if the NIS’s sickness benefit is to remain a viable option for Barbadians, greater measures must be implemented to protect it and stamp out “unsavoury practices” of inappropriate claims.

Her comments came after figures presented by Mr. Carrington revealed that over a ten-month period in 2009, 533 doctors issued 49,555 certificates and 561,000 benefit days.

The sickness claims recorded during that period totalled $30 million, and exceeded the $28.6 million which was budgeted by the NIS for that entire year.

The specific areas of concern were that some doctors issued many more sickness certificates than the average; and that patients treated the sick days as an entitlement which were too often used as vacation days and not for genuine sickness.

Mr. Carrington also pointed out that when compared to the rest of the region, Barbados had claims for twice the number of sick days and also twice the payout.

The Labour Minister maintained that the trend could not continue, and requested the support of the medical community and unions to work towards a solution, stressing that public education was needed on the role and use of sickness benefit. The Minister and the President of BAMP agreed that NIS would meet with the doctors to this end.

Dr. DaSilva also urged practitioners to stand by their training and the medical literature, especially with respect to the proper assessment of minor injury.