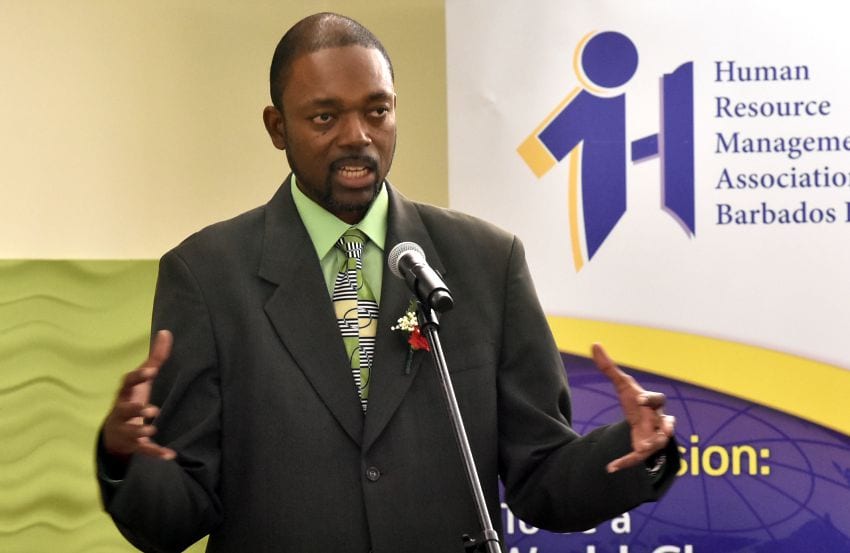 The work being done by the Human Resource Management Association of Barbados (HRMAB) Inc. has come in for praise by Minister of Labour and Social Partnership Relations, Colin Jordan.

Addressing the official opening of the HRMAB’s 20th Annual Conference yesterday at Radisson Aquatica Resort, Minister Jordan commended the organization for its commitment to hosting the conferences over the years.

“Important decisions must be made, and are being made, not only in the public service, but also in the private sector as we seek to create a workforce that is talent-driven, technologically savvy and proactive at a time when many changes are occurring due to globalization and technological innovation…. We must develop workers and we must create workplaces that are fit for purpose,” he maintained.

Mr. Jordan noted that human resource (HR) in its many forms was critical to the success of any organization achieving its goals and objectives and maintaining a comparative advantage in whatever field of operation.

Emphasizing that today’s dynamics required organizations to attain an advantage if they were going to survive, contain costs and deliver profits, Mr. Jordan added: “It is very important that HR Managers/Directors be seen as equals at the table in discussing matters of importance to the sustainability and profitability of companies. The success of any business is largely dependent on the effective management of workers and their level of commitment and satisfaction with their place of employment.”

The Minister also pointed out that he was saying this deliberately because over the years HR was put on the back burner but it needed to be kept in the mind of business people that businesses didn’t operate on air, water and electricity.

“Businesses, even the most automated are functional and viable because of the people who are part of the organisation. And, those people have to be led, guided, coached and managed,” he pointed out.

He stressed, too, that the advent of globalization had forced senior management within developed and developing countries to relook how organizations are managed as they are confronted with the changing world of work.

However, he assured the HR delegates they needed not to be apprehensive or daunted by the challenges of globalization, but create the future they desired “in the operations of organizations that we are part of with respect to the development of our workers”.

Meanwhile, President of HRMAB, Shane Howell, explaining the association’s success was not built solely on its boardroom interactions, said it extended outside conferences and its secretariat. “It is built on our ability to recognise the interconnectedness of our efforts and to identify and engage stakeholders where they sit whether in schools or the community.

“Our practice is one of the most cross-cutting professional practices inside organizations as we touch operations, finance, HR and other areas. And, it is key for us to recognize the stake that we hold in the nation’s economic development. So, this is truly a great time and one of evolution for our practice, our profession and for us to stand confidently as we rethink HR and drive our businesses forward,” Mr Howell stressed.

The night also saw two stalwarts and former presidents, Gail Springer and Ed Bushell, being awarded Honorary Membership to HRMAB for their dedication and commitment to that organization.