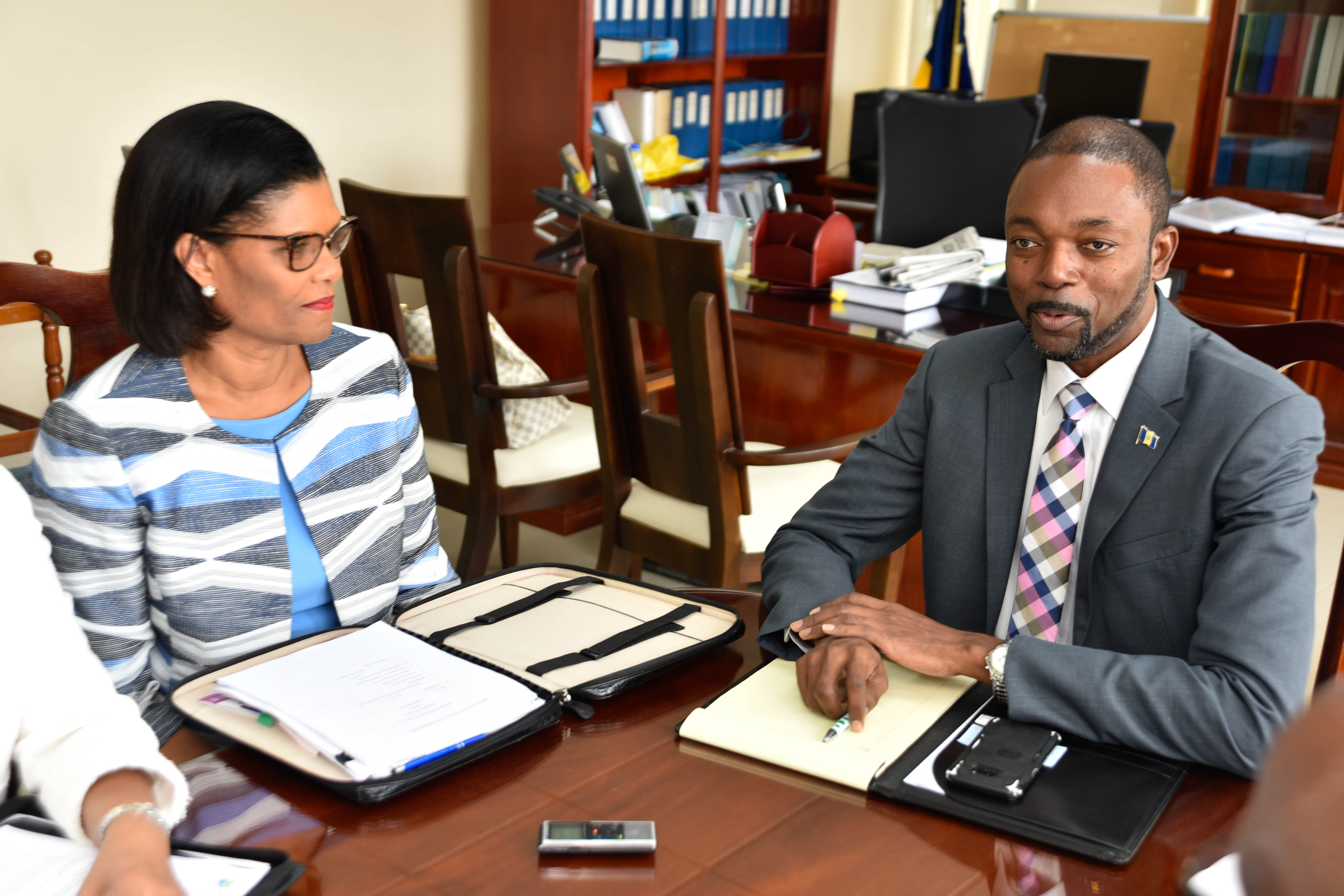 The Employment Rights Act (ERA) was a major talking point recently when the Barbados Employers’ Confederation (BEC) paid a courtesy call on the Minister of Labour and Social Partnership Relations, Colin Jordan, at the Warrens Office Complex, Warrens, St. Michael.

The Minister was joined by Permanent Secretary (Ag) Marva Howell and the Chief Labour Officer, Victor Felix for the courtesy call paid on him by President of the BEC, Marguerite Estwick and a delegation of three other representatives.

In welcoming the team, Minister Jordan acknowledged that his Ministry worked directly with employers, held responsibility for the enactment of legislation, and determined the framework between worker/employer relations with the goal of building businesses and ultimately the economy.

President of the BEC, Marguerite Estwick, in response noted her organisation’s active involvement in the Social Partnership and commended the Ministry for its role in facilitating the continued “cordial relationship” that resulted in most meetings being consultative in nature rather than contentious and conciliatory.

The President, however, voiced concerns about the ERA and the Holidays with Pay Act, regarding them as the “two most challenging pieces of legislation”. Of the former, she said employers deemed it “too onerous” and it was “much too difficult for practitioners to manage” with every single termination finding its way before the Employment Rights Tribunal (ERT).

It was emphasised, that the ERT, with a backlog of cases, seemed inadequately resourced. Mrs. Estwick stated that the number of cases brought before the ERT up to May, 2018, stood at about 250 with others still currently being processed. She reiterated the complexity of the legislation, as well as the time lag between the termination of an employment relationship and the decision of the ERT regarding the termination.

With respect to the Holidays with Pay Act, it was noted that this Act was being further reviewed to address any deficiencies.

Minister Jordan in addressing the President’s concerns informed that his ministry reviewed legislation on a continual basis.

“Review is ongoing… We understand here that the Act is something we have to look at and we have been looking at it and I think we have gotten some responses already,” he said.

Discussion also centred on the Employment Sexual Harassment (Prevention) Act, 2017-21; the implementation of a 24/7 economy; the informal sector that represents a potentially significant revenue base; and the possibility of establishing a comprehensive labour code in similar vein as Grenada and St. Lucia.

The Minister, in concluding, reiterated his Government’s commitment to working with the employers’ representatives to address and mitigate any labour related issues and assured them that much of what was addressed would be assessed internally.