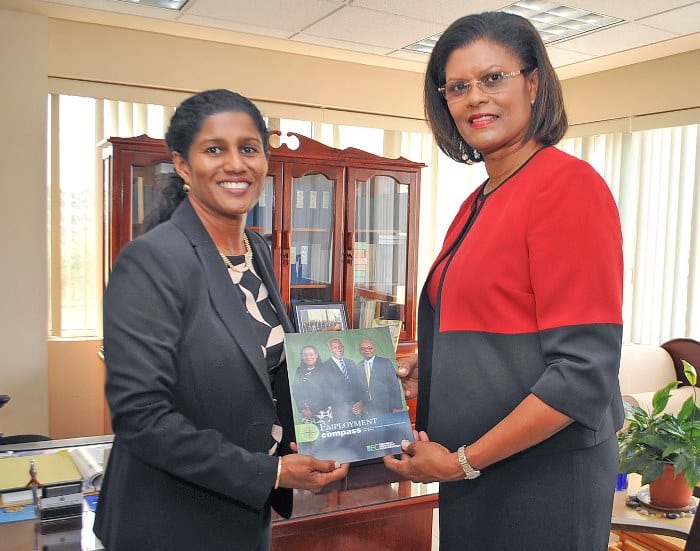 Employers must invest in training their workers, if they wish to see them become more productive and engaged.

This advice was imparted by Minister of Labour, Social Security and Human Resource Development, Senator Dr. Esther Byer Suckoo, during a recent courtesy call by the newly appointed president of the Barbados Employers’ Confederation (BEC), Marguerite Estwick and Executive Director of the BEC, Tony Walcott.

During the round-table discussion at her Warrens, St. Michael office, Senator Byer Suckoo was adamant that engagement must become part of the “DNA of the Barbadian worker and employer” as it ultimately leads to increased productivity.

“When workers are trained, and because of their training are given greater responsibility and allowed to do more, they are not just soldier ants. They are more involved and it becomes more of a profession for them.

If you train a worker to work on a particular machine, he becomes an expert on that machine and you take his advice when he says this needs tweaking. That boosts his morale, his confidence, and you see a worker becoming more engaged”, the Minister illustrated.

While noting that some employers often miss the mark when workers are treated as “soldier ants” who should “do what you tell them and nothing more”, Senator Byer Suckoo pointed out that this cultivates a workforce which responds by coming to work, marking time and also not doing much more. This cycle, she explained, churns out scores of workers who feel no real connection to what they do.

In keeping with the pillars of the Human Resource Development Strategy, Minister Byer Suckoo also emphasized the importance of certification, and revealed that her Ministry is seeking to move towards the formal recognition of training courses. This would ensure that workers who have done courses while on the job have evidence of that training when they move on.

On this premise, the Labour Minister declared that a system must be put in place, where there can be a transference and recognition of such knowledge. The courtesy call was also attended by Chief Labour Officer, Vincent Burnett and Acting Deputy Permanent Secretary, Marva Howell.