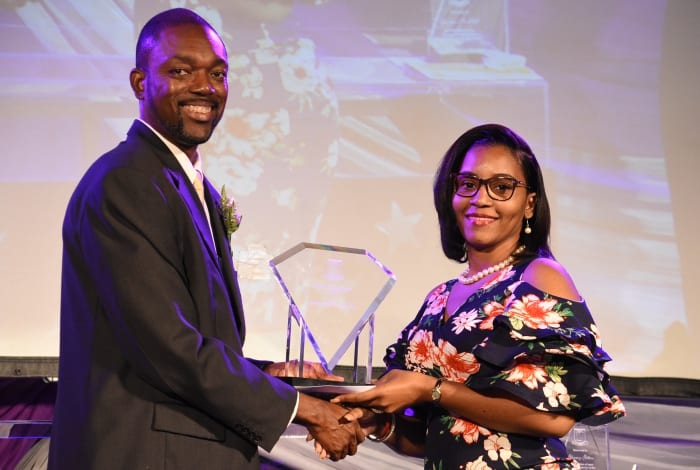 Minister of Labour and Social Partnership Relations, Colin Jordan, presenting Renee Waterman with the Employee of the Year Award at the 51st anniversary GEM Awards ceremony of the National Insurance Scheme (NIS) at the Lloyd Erskine Sandiford Centre on Saturday. (C.Pitt/BGIS)

The National Insurance Scheme (NIS) can count on the support of Minister of Labour and Social Partnership Relations, Colin Jordan, for its soon-to-be-launched awareness campaign that will encourage self-employed persons to use the coverage provided by the Scheme.

This assurance was given by the Minister last Saturday as he addressed the 51st Anniversary of the NIS and GEM Awards Ceremony, at the Lloyd Erskine Sandiford Centre, Two Mile Hill, St. Michael.

Noting that one of the strategic objectives of the NIS was to improve on collections and compliance, the Labour Minister stressed that the Collections and Compliance sections at the NIS had to collaborate to encourage the utilisation of these services by several persons, so they could enjoy the social protection available to them.

Management and staff of the NIS were themselves called upon to continuously promote the services of the NIS and to ultilise every medium, including social media, to inform persons about advantages of being a contributor to the NIS.

And, the Minister said: “Let them be aware that social security is a benefit during and after our work lives; and it also supports our families. Social protection is a right and therefore, all workers should be sensitised to that entitlement.”

The NIS was established on June 5, 1967, to protect the needs of Barbadians workers. The department manages funds such as the National Insurance Fund, the Unemployment Fund, the Severance Fund, the Catastrophe and the Retraining Account.