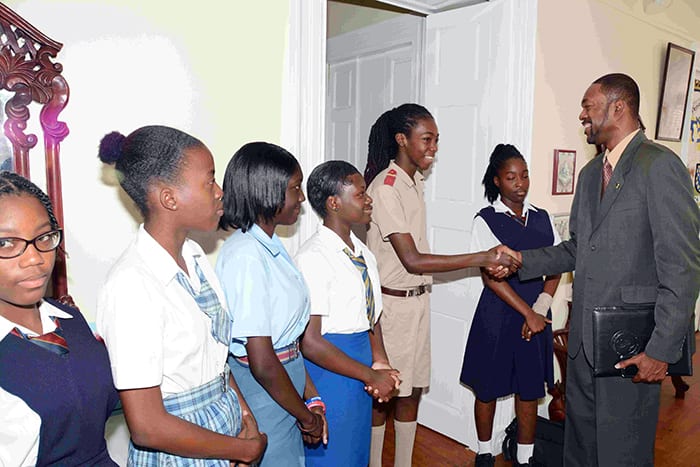 Twenty-five secondary students, set to finish school next week, have been provided with some important advice to help them transition into the world of work.

The advice was given to them yesterday by Minister of Labour and Social Partnership Relations, Colin Jordan, as he addressed a conference on Leadership and Influencing Change, held by the Pinelands Creative Workshop (PCW) at Bagatelle Great House, St. Thomas.

Among the most powerful statements the students heard was that all of them could be leaders and influencers.  Stating that he had come from a small village in St. Peter, Mr. Jordan said: “All of you, regardless of where you have come from or where your parents have come from, or your current situation, all of you can be leaders; all of you can be change agents…. You can make something of your life.”

While adding the outcomes of the programme would help prepare them for the future of work, he noted it was important to realise it was a journey. “Learn all that you can, apply it to yourselves, and remember that you are on a journey. In some respect, this is just the beginning,” the Labour Minister said, as he urged them to utilise the skills in their personal and professional lives and to pursue a path of lifelong learning.

The conference is part of a two-week Career & Life Management Program (CALM) coordinated by the PCW and funded over the last five years by the Maria Holder Memorial Trust. It is also being held in collaboration with the National Productivity Council, Higher Heights and other private and public sector partners, with the aim of providing school leavers with critical soft skills to shape character and attitude for roles as new employees and leaders.

Chief Executive Officer of the PCW, Sophia Greaves-Broome, noted that research conducted by SALISES in 2007 and a further rapid assessment in 2011 had shown males and females, 15 to 24, as being “most at-risk”. She said at that time the major barriers to employment for this group included poor basic education, poor work ethics, lack of marketable skills and a lack of work experience.

Mrs. Greaves-Broome further noted that on re-examining the labour market for changes, the assessors found no major improvement and the key concerns for employers were lack of qualifications, lack of interest and poor attitudes, once hired.

Commending the Maria Holder Memorial Trust and the others for their involvement in the CALM programme, she said: “With the absence of the requisite qualifications, having soft skills can be the added value to give young inexperienced youth that first opportunity….The fragility of our economy demands that we have quality employers and a future leadership that is able to inspire, give purpose or meaningful direction to collective effort….We are engaging in human capital development that can be used to create economic value for these participants, their employers and the country.”

Meanwhile, Chief Project Officer with the Trust, Ruchelle Roach, while thanking Government and the PCW on its work over the last 40 years, said she believed it was a programme more young people should be exposed to. She urged the students to be effective in communication, speak properly and politely, manage their time and dress well for the workplace.