Lashley: Grade ‘A’ For CARIFESTA XIII

CARIFESTA XIII has been a resounding success.

This declaration came from Minister of Culture, Sports and Youth, Stephen Lashley, who delivered the feature remarks at the Official Closing Ceremony of CARIFESTA XIII which was held at the Kensington Oval on Sunday night.

While addressing the massive crowd gathered at the Oval to celebrate the end of the region’s largest arts festival, Mr. Lashley highlighted the many areas in which the festival excelled.

“I am pleased to report that the critical objectives of the festival were met.  From discussions held with Ministers who were present and Directors of Culture, we were able as policy makers to recognise the on-going importance of the cultural industries to the development of national economies and the enrichment of our cultural capital.”

According to the Culture Minister, not only was Barbados able to showcase the diversity of the region’s cultural industries by offering a “rich and diverse programme of cultural presentations” but there was also the opportunity to encourage appreciation for the value of cultural goods, services and activities.

He noted that CARIFESTA XIII had also demonstrated that the cultural industries could play “a significant role in national development”.  However, he said that there was still some work to be done in various areas, which were points of discussion between buyers and exhibitors.

According to Mr. Lashley, the areas of weakness were highlighted and recommendations were made as to how the challenges could be overcome.

Examining the many positives of the Festival, Minister Lashley said that the legacy of CARIFESTA XIII would be rich, noting that major investment was made in the architectural development of various locations.

“We have been able to restore Queen’s Park House, including the famous Daphne Joseph Hackett Theatre; refurbish the Gymnasium, thanks to the People’s Republic of China and upgrade some schools as performance spaces, including Combermere and Foundation,” he said. 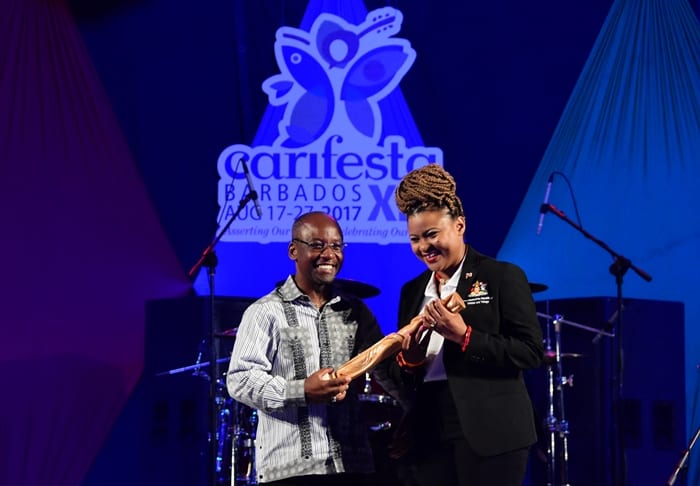 While the Culture Minister examined CARIFESTA XIII’s current impact on the development of the cultural industries, he reflected on how much CARIFESTA IV in 1981 benefited the cultural landscape of Barbados.

“Barbados was able to meet all the technical requirements for CARIFESTA XIII.  This is as a result of the legacy of CARIFESTA IV, which was held in Barbados in 1981.  The seeds sown in technical theatre then, have certainly borne fruit now, as they have provided the platform on which Barbados’ expertise was built to give us the self-sufficiency we needed to stage CARIFESTA XIII in 2017,” the Minister explained.

However, while the festival had several high points, there were some challenges. Pointing to the passage of Tropical Storm Harvey, the Minister said, “…we did not have a perfect start.  However, we pulled together as a team and I can state here this evening that CARIFESTA XIII was a resounding success.”

Mr. Lashley also spoke about the sudden death of independent exhibitor from Guyana, Petal Frank, who died on Friday. Sending his condolences to members of the Guyana delegation, he commended their “courage” to continue their participation despite their loss.

After his speech, as is the tradition, the Culture Minister passed the CARIFESTA Baton to Trinidad and Tobago’s Minister of Community Development, Culture and the Arts, Nyan Gadsby-Dolly, as that country prepares to host CARIFESTA XIV in 2019.