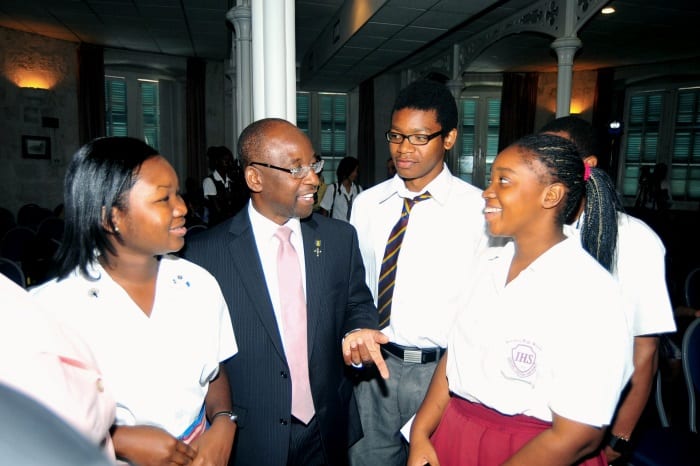 The nation’s young people need to be encouraged and guided.

This point was made on Monday by Minister of Youth, Stephen Lashley, as he addressed the Youth Division’s open day and Youth Week activities at the Ministry’s headquarters, Sky Mall, St. Michael.

Mr. Lashley told the over 300 students from various primary and secondary schools across the island that they needed to be supported at all levels as they sought to better themselves and the nation.

“It is important that we [do] not spend most of our time focusing on negative behaviour… we have to spend more time highlighting positive behaviour! We have some positive young people involved in innovation, in creativity, in blazing a trail that will be critical for the future development of Barbados,” he underscored.

The Youth Minister further added that he would like the country as a whole to spend time encouraging the youth, and highlighting the various positive projects and programmes that they were undertaking.

“Many of our young people are hard at work; they are focused on the development of not only themselves, but of their various communities,” he maintained.

Alluding to some of the challenges faced by Barbados’ youth, Mr. Lashley suggested that many of the issues needed to be met through collective community support systems.

He noted that there was a need for the older generation to not only set positive examples, but, wherever possible, to also encourage the youth to take part in worthwhile ventures.

Youth Week opened on Sunday, September 25, with a church service at the St. George Parish Church, and will run until Saturday, October 1.

For more information on the upcoming events, members of the public may visit the Division of Youth Affairs’ Facebook page at https://www.facebook.com/divisionofyouthbarbados.