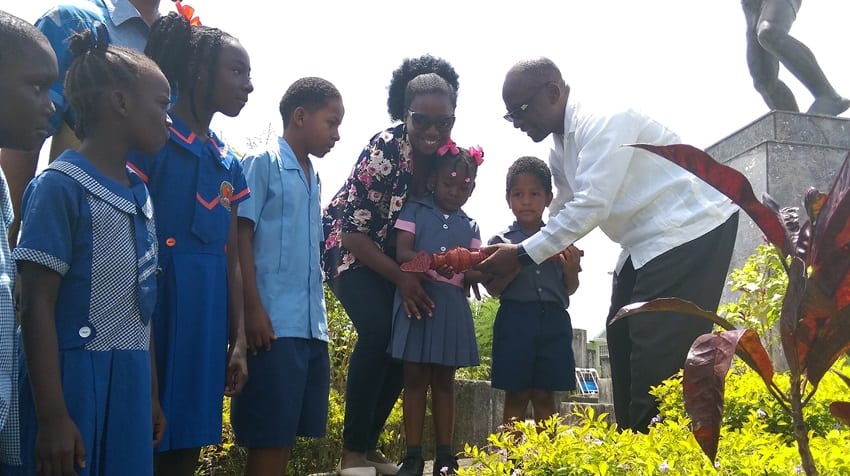 Young Barbadians have been tasked with the responsibility of enacting self-reparations.

This charge came from Minister of Culture, Sports and Youth, Stephen Lashley, as he addressed the official hand over of the symbolic Self-Reparations Baton. The ceremony, which included various students from across the island, took place in front of the Emancipation Statue in Haggatt Hall, St. Michael.

Mr. Lashley told the scores of nursery, primary and secondary school students gathered that unless the principle of reparations was recognised as being a “key part of who we are”, there would be no way “to take forward the significant and invaluable work of our National Heroes”.

This must start with self-reparations, how we begin to look at our own lives; how we can repair in our own way some of the injury, some of the things that are being done even today that are wrong,” he explained.

Encouraging students to look at the changes they can make in an effort to promote self-reparations, the Youth Minister asked them to find the best ways to make a difference.

In recognition of the coming National Heroes’ Day holiday, Mr. Lashley reminded the students that it was “a very solemn and important” day, when Barbadians were required to reflect on the contributions they made to the development of Barbados.

The estimated 300 students then left the Emancipation Statue for a tour of the ‘Freedom Corridor’, where they saw the various monuments and locations significant to the National Heroes.

The tour, organised by the Commission for Pan African Affairs, stretches from the Garrison Savannah to the Spring Garden Highway.