Lashley: Teach Them About Our Past Traditions 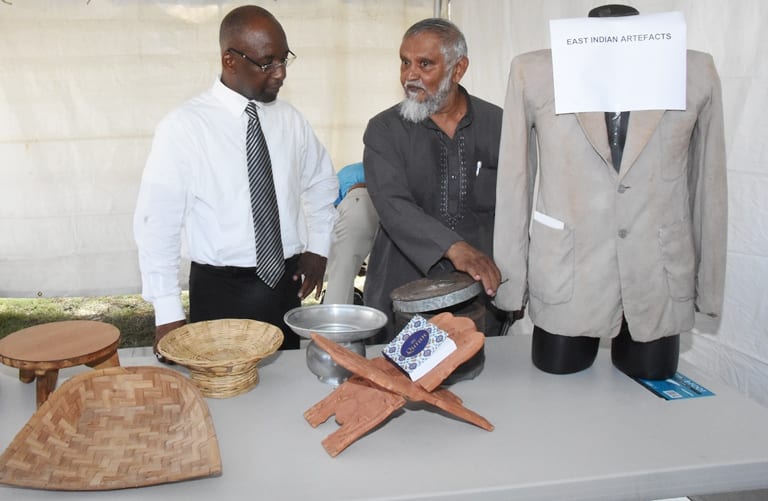 Culture Minister, Stephen Lashley, is given a lesson on East Indian Artifacts by author Sabir Nakhuda of the Barbados Muslim Association, today, at the Genealogy Marketplace held in the grounds of the Archives Department, Black Rock, St. Michael. (C.Pitt/BGIS)

Older generations of Barbadians are being encouraged to pass on their knowledge and traditions from bygone days to successive generations.

This call came today from Minister of Culture, Sports and Youth, Stephen Lashley, as he addressed the opening of a Genealogy Marketplace at the Archives Department, Black Rock, St. Michael.

Mr. Lashley told the large crowd gathered on the Department’s grounds that it was imperative that all Barbadians were made aware of all forms of their heritage, whether tangible or intangible.

Citing traditional games as some of the things which should be passed on to subsequent generations, he said: “I also want to encourage the older ones here, especially the parents, grandparents, aunts and uncles, to not simply observe the traditional games like warri and hopscotch that would be played here today but teach your children and your grandchildren how to play these games.”

Turning his attention to the younger generation, Mr. Lashley noted that there was a need for young persons to focus less on the trending games and try to engage in more traditional ones.

“…Give the Pokémon Go a break and give these traditional Barbadian games a chance. Who knows, [you] just might enjoy them! I believe that by so doing we can strive to bridge the gap between the past and the present… It is imperative that we make a concerted effort to involve our youth in this critical initiative,” he stressed.

Adding that initiatives such as the Genealogy Marketplace should not be limited to celebrations such as Barbados’ 50th anniversary of Independence, the Culture Minister said that it was his hope that it was “a reflection of things to come, of greater and lasting networks both locally and across the Diaspora…”.

The Genealogy Marketplace was a partnership between the Archives Department and the Barbados Tourism Product Authority, and was held as part of the Barbados Network Consultation.