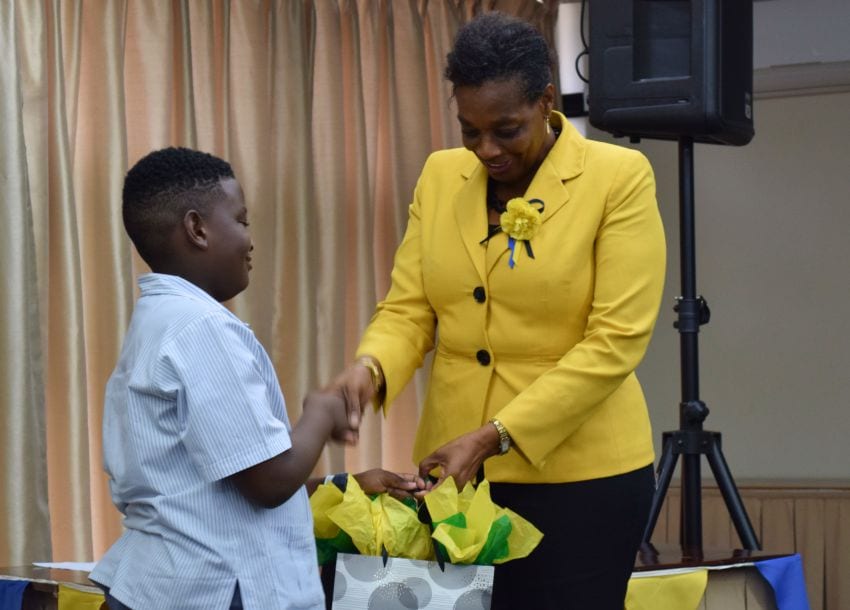 Ten-year-old Giovani Downie of the St. Giles Primary School, is pleased as he receives his 1st place prize from Acting Postmaster General, Valeta Best, during the prize-giving ceremony for the 47th International Letter Writing Competition. (GP)

The importance of letter writing was underscored by competitors in the 47th International Letter Writing Competition.

Students were challenged to write on the theme: Imagine you are a letter travelling through time. What message do you wish to convey to your readers?

In his letter, Giovani wrote: “The introduction of technology has created improvements, but my importance seems to have faded as I no longer can see the excitement on people’s faces as the postman approaches.”

The international judging panel described Giovani’s entry as one that sent a very touching message to readers about the letter writing process.

The students received their prizes, which included gift vouchers sponsored by the Barbados Public Workers’ Cooperative Credit Union Limited, Duty Free Caribbean, and the Barbados Postal Service, as well as electronic equipment from DC Office People, during a ceremony in the Conference Room of the General Post Office last week.

The National Letter Writing Competition contest is organized annually to encourage children to develop their literary skills and research proficiency, as well as an appreciation for the art of letter writing.  The competition also serves to inspire children to exhibit their talent and to foster a passion to communicate their experiences.

The entry submitted by the national winner advances to the global round of the international contest, which is held by the Universal Postal Union.

Next year’s 48th International Letter Writing Competition for Young People, will target students between the ages of 10 and 15. They will be challenged with the topic: Write a Letter to Your Hero.

The national deadline for those letters will be February 2019.