Inniss: Licences To Be Revoked 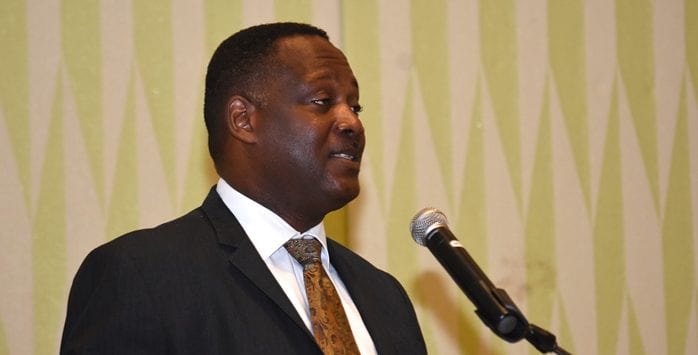 Minister of Industry and International Business, Donville Inniss, revealed that the licences of four companies would be revoked shortly, over allegations of money laundering, corrupt practices and defrauding citizens in foreign jurisdictions. (FP)

In an address to scores of stakeholders in the sector attending a Corporate Trust and Service Providers Seminar in the Grande Salle, Tom Adams Financial Centre, the Minister revealed that the licences of four companies would be revoked shortly, over allegations of money laundering, corrupt practices and defrauding citizens in foreign jurisdictions.

“It was recently drawn to the Ministry’s attention that we were able to identify a few companies that have not been cooperating as they should or have beneficial owners who have been charged and found guilty of some activity which we do not wish to be associated with in Barbados. Therefore, I as Minister shall, over the next few days, be revoking the licences of such associated companies,” Mr. Inniss revealed.

He continued: “We were advised by two of our service providers that the beneficial owners of the entities have either been charged or found guilty of some illicit activities in foreign jurisdictions which the entities may or have been involved in such acts. We are duty bound when we receive such information to investigate in a timely manner and take decisive action.”

He further pointed out that the Ministry’s International Business division, as a regulator, had a duty to investigate companies from time-to-time for acts that were considered not in the best interest of Barbados as a domicile for international business.

He said there was too much at stake given the overseas entities and individuals who were watching Barbados and analysing its business activities.

In fact, Mr. Inniss said the Ministry along with other regulators such as the   Financial Services Commission and the Central Bank of Barbados must “act without fear to ensure that we do our jobs”.