Lights On For Jubilee Celebrations! 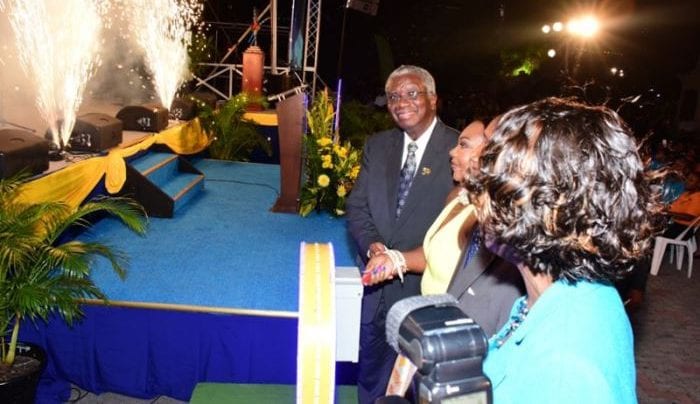 Light is symbolic of many things: hope, salvation, and even peace.

As scores of locals and visitors alike converged on National Heroes’ Square on Tuesday to witness the 21st annual Sagicor Life Inc. Lighting Ceremony, they were asked to see the hundreds of lights which transformed the City’s buildings as a symbol of Barbados’ bright future.

As evening fell upon Bridgetown, spectators from all walks of life took up every available vantage point in order to watch the ceremony unfold.

The atmosphere was filled with anticipation, as many fixed their gaze upon the stage erected in front of the Parliament Buildings.

Serenaded by the musical stylings of the incomparable Royal Barbados Police Force Band, many onlookers bobbed their heads and tapped their feet to the calypso, folk and spouge rhythms as the programme got under way.

This year’s theme: Celebrating Who We Are, could not have been more appropriate, as some of the nation’s brightest talents showcased their abilities in the square.

In her welcome address, Chairperson of the National Coordinating Committee for the 50th Anniversary of Independence Celebrations, Senator Maxine McClean, encouraged Barbadians to continue to seek the ‘light’ of reflection, renewal, remembrance and commitment.

Reflecting on the many activities which had taken place throughout the year of celebrations, the Senator praised all the partnering stakeholders for participating in the planning and execution of the celebrations.

She further stressed that the occasion should be used as a time to reflect on the need to “light the lives” of all Barbadians, particularly the disadvantaged.

Chief Operating Officer of sponsors Sagicor Life Inc., Edward Clarke, echoed Senator McClean’s statements, and emphasised that there was a need for Barbadians to continue to build on the great things that have already been achieved.

Acknowledging that there would be victories and disappointments along the way, Mr. Clarke urged those gathered to continue to “press on”, and be the change they wanted to see, as there needed to be an overall mindset where persons sought to be part of the solution.

During his address, Minister of Culture, Sports and Youth, Stephen Lashley, challenged those gathered to see the ceremony in a more significant way.

“As we light up our nation Barbados this evening, I encourage [my] fellow Barbadians to symbolically use the light as a reflector or mirror…When we look into the light, what do we see reflected?

“As citizens do we stand proud and confident? Do we see ourselves as intelligent and creative with the world at our fingertips? Or, on the other hand, are we overwhelmed by our circumstances and sit and wait to die? I suggest that we remember where we have come from and how far we have reached and how much we have achieved as one of the freest black nations in the world,” he stated.

Mr. Lashley noted that Barbados had a lot to be grateful for as the nation celebrated its golden jubilee, with advances in infrastructure, industry, and social development.

However, while he encouraged persons to focus on the positives, the Minister said he was not asking individuals to ignore the issues of national importance that had emerged over the years.

In fact, he suggested that “as far as possible, we [should] convert what could be seen as a negative into an opportunity for learning that will translate into growth and development.

“Let the challenges spur us on to find long lasting solutions to problems that may have plagued us for years. Let us see the cup as half full rather than half empty,” he urged. 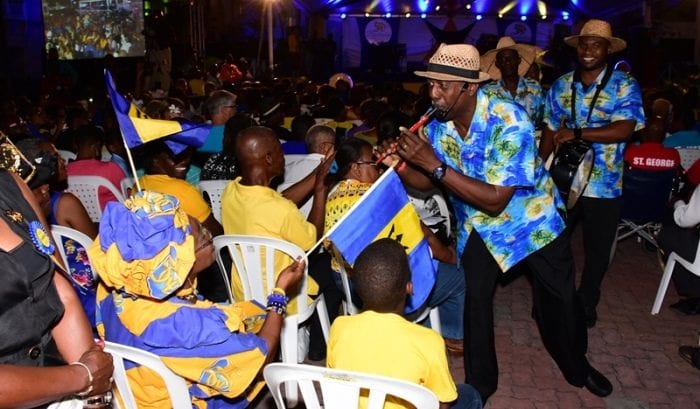 In addition, Mr. Lashley reminded those gathered that Independence was a process, and with it came obligations and responsibilities. “Independence is meaningful when citizens shoulder their obligations to one another and diligently discharge them,” he insisted.

According to him, Barbadians must build on the lessons of the past generations, lessons that would have demonstrated the values of sacrifice, courage, and resilience during the nation builders’ quest for Independence.

Following his speech came the moment many had waited for: the flicking of the switch to illuminate the capital, select government buildings, and roundabouts across the island.

To carry out this task were Prime Minister Freundel Stuart and three persons born on Independence Day in 1966: Kathryn Thornton, Roger Brown and Margo Yarde.

Following a rousing countdown, onlookers watched as Bridgetown was once again illuminated with the National Colours, an annual event made even more special, thanks to the celebration of the country’s golden jubilee.

As fireworks exploded in the night sky, it was clear that this final month of celebrations would truly be a worthy climax to the year-long celebrations.

For a list of the remaining events marking Barbados’ 50th anniversary of Independence, visit www.50barbados.com.