Businesses Need To Think ‘Outside The Box’ 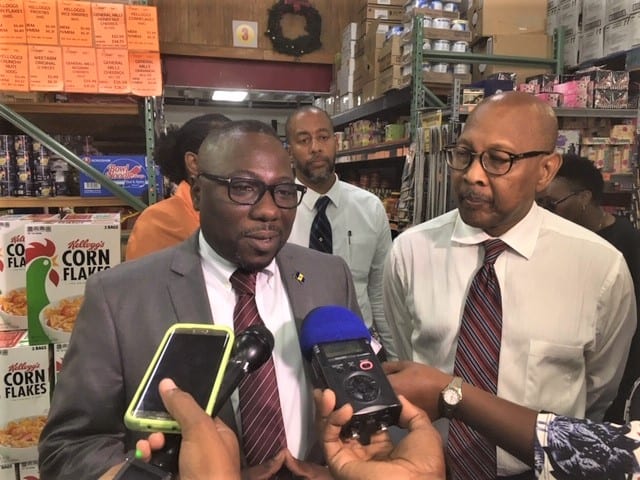 Minister of Small Business, Entrepreneurship and Commerce, Dwight Sutherland, speaking to the media during a tour of of ShopSmart Inc., Cheapside, Bridgetown today. In the centre (background) is Deputy Director, BNSI, Haydn Rhynd while to the right is Chairman and Managing Director of ShopSmart Inc., Wallace Griffith. (S.Forde/BGIS)

Barbadian businesses in this ‘economic climate’ should consider thinking outside the box with regards to their business model.

Minister Sutherland noted that reviewing the business model could improve the operations of the business, leading to efficiency, and in addition profitability and longevity.

He congratulated Chairman and Managing Director of ShopSmart Inc., Wallace Griffith, for doing so when he introduced the business model of club membership shopping to the Barbadian public back in November 2000.

“Wholesale retailing changed the landscape of the retail sector some 18 years ago … by giving the Barbadian consumer more options with their purchasing power and this … resulted in a reduction of prices among other businesses in the sector,” Mr. Sutherland added.

Noting that with the removal some six months ago of the National Social Responsibility Levy (NSRL) retail prices on the island had not significantly decreased, Minister Sutherland stated:  “My Ministry was charged with the responsibility of monitoring prices and to also make sure the product offering to the consumers are properly labelled and of high quality standard … and hopefully with the removal of the NSRL consumers could soon see retailers move prices further down.”

Speaking to the media after the tour, Minister Sutherland highlighted two main concerns which were raised by the senior management of ShopSmart Inc. – preferential shipping rates to select companies operating in Barbados and the billions of dollars in dumped products as a result of expiry and ‘best before’ dates.

Mr. Griffith pointed out that there is a difference between expiry dates, ‘used by’ dates and best before dates and requested that the policy regarding removal of products off the shelves could be amended to reflect the difference.  However, Minister Sutherland and other Ministry officials advised that further discussion would have to ensue before any changes could be made.

The Small Business, Entrepreneurship and Commerce Minister stressed that the first mandate of the Department of Commerce and Consumer Affairs (DCCA) and the Barbados National Standards Institution (BNSI) is the protection of the consumer with regards to quality and they must err on the side of caution, so no consumer is exposed to any health risk.

He assured Mr. Griffith that he would address the concerns raised within the near future, after consultation with the shipping Industry and Ministry personnel.

Minister Sutherland also took the time to give kudos to both the DCCA and BNSI for their ‘on the ball’ vigilant and proactive efforts at monitoring the standards of products coming into Barbados, particularly labelling and for timely information about product recalls.

He continued: “I believe in standards and allowing the DCCA and BNSI to do their jobs ….  I’m not going to call any custom officer to ask them to release any goods in this country that are not properly labelled.”

Shopsmart Inc. was established in November 2000 with its headquarters in Holders Hill, St. James, and was the first warehouse membership club in Barbados.  It offers bulk packaged everyday items, as well as electronic goods, appliances, furniture and household supplies, among other items.