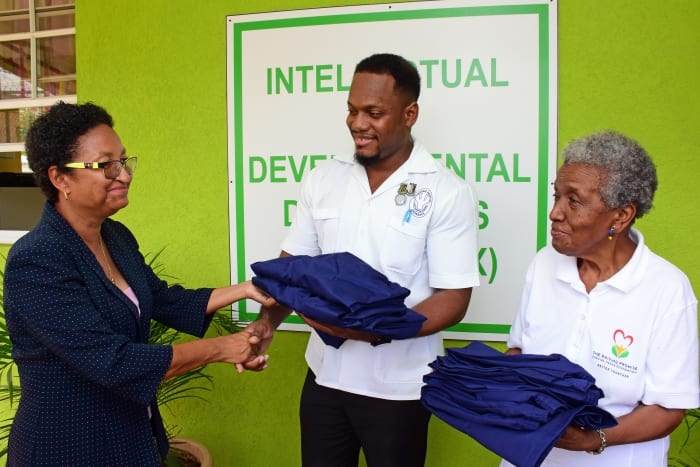 Thirty men who attend the Intellectual and Developmental Disabilities Unit at the Psychiatric Hospital were all smiles on Tuesday as they received a donation of pants and stepping stones from a local charity.

Loretta Lashley, president of the Raising Promise Special Needs Foundation, based in Kew Road, Tudor Bridge, St. Michael, presented 90 pairs of pants and a number of stepping stones to Nursing Officer in charge of the unit, Ryan Lewis.

Ms. Lashley, the mother of two adult children with disabilities, explained that her foundation volunteered at the facility and was committed to assisting the residents in whatever way they could.

Nurse Lewis expressed thanks on behalf of the staff and clients of the unit, noting that efforts such as these were important in helping to improve the day-to-day lives of the men.

He revealed that the men, aged between 18 and 70, were taught basic life skills at the unit, including grooming, recreational and educational activities.  The primary aim was to prepare them to be independent so they could be reintegrated into society, he added.