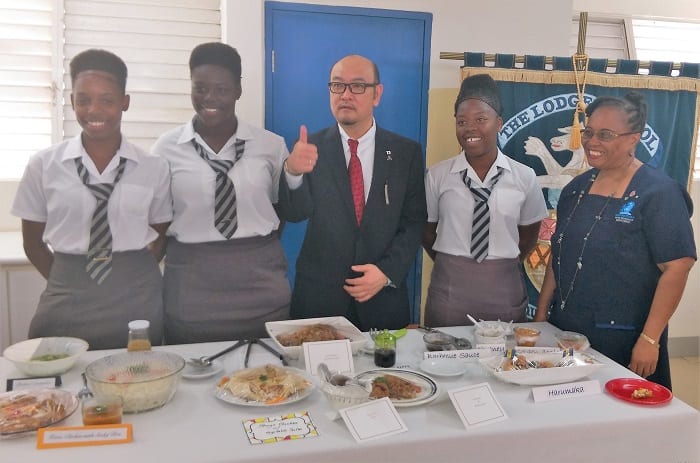 Japanese Ambassador to Barbados, Teruhiko Shinada, poses with Lodge School students and Head of the Food and Nutrition Department, Sonia St. Hill, following his visit to the St. John school yesterday. (Photograph courtesy the Embassy of Japan in Barbados)

With travelling, living and studying in Asia expected to soon become a reality for many Barbadians, students here are being urged to seize the potential opportunities.

This was the message sent to Lodge School students when Parliamentary Secretary in the Ministry of Education, Science, Technology and Innovation, Senator Harry Husbands, accompanied Japanese Ambassador to Barbados, Teruhiko Shinada, on a visit to the institution in Society, St. John. The touring party was guided around the recently-refurbished institution by Chairman of the Board, Pat Cheltenham, and Principal, Winston Dowrich.

Senator Husbands pointed out there were tremendous opportunities for students to “broaden their horizons and think of their future not only in terms of Barbados but the entire world”. Noting the Ambassador’s visit would help them to realise these possibilities, he thanked the envoy saying: “I am confident that this visit would be a successful one and lead to greater opportunities for you and students in Japan, in the near future.”

Ambassador Shinada, who has been on the island for four months, acknowledged it was his first visit to a local school. He said that despite the geographical distance between Barbados and Japan, the two countries had been maintaining “good and friendly relations”, and expressed the hope that in a similar manner, Japan could have such a relationship with The Lodge School.

Mr. Shinada also commended the school for its success in academics as well as in sports, music and the arts, and told students they had the potential to “contribute to the prosperity and better future of this country”. “Be proud to be a student of The Lodge School, work hard but enjoy your school life and make a lot of good friends. You can because you think you can,” he advised.

Meanwhile, Principal, Winston Dowrich, also urged his charges to contribute to society, and stressed they had to be able to do so against the back drop of globalisation. “The global environment in which we now operate sees people interacting and even working together while living in different parts of the world.  An awareness of and an appreciation of other cultures is critical then to the success of our students in this new environment,” he stressed.

He pointed out that scholarships were on offer by Japan through the Education Ministry of Education and said these aimed to foster human resources who will become “bridges of friendship” between the two countries.

The Principal also told the Ambassador his school was keen to be part of planned exchanges between Japan and Barbados and he envisaged forming a mutually beneficial relationship with a secondary school there that “would perhaps lead to an exchange of students and teachers”.

He singled out Fukushima Prefectural Asaka High School as one such school, and indicated that one area of particular interest to The Lodge School was Japan’s use of technology in the classroom.