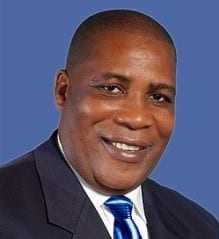 Minister of the Environment and Drainage, Dr. Denis Lowe. (FP)

Minister of the Environment and Drainage, Dr. Denis Lowe, is the new Vice President for the Latin America and Caribbean region on the Bureau of the Second United Nations Environment Assembly (UNEA).

He was elected during the just-concluded global environment policy-making forum in Nairobi, Kenya.

Dr. Lowe will hold office for two years, and join his colleague, Minister of the Environment of the Government of Costa Rica, Dr. Edgar Gutierrez Espeleta, as the new representatives for the Latin America and Caribbean region group (GRULAC). Mr. Espeleta has been nominated as President to the UNEA.

The Forum analyses and reviews critical issues on the international environment agenda and seeks to develop regional strategies to address them. It acts as the region’s environment policy-making body.