A volunteer being transported for ‘treatment’ by members of the Barbados Fire Service at the Exercise Tradewinds simulation at the fictitious ‘Hotel Glendairy Meadows’ last Saturday. (C.Pitt/BGIS)

Persons across Barbados who volunteered and gave freely of their time and energy have been heralded as the real heroes of Exercise TRADEWINDS 2017.

Close to 800 volunteers came forward, allowing members of the Exercise TRADEWINDS 2017 Secretariat to stage a realistic exercise from June 6 to 12 across Barbados.

Director of the Combined Exercise Control Group (CECG), Major Carlos Lovell, expressed his gratitude for the volunteers’ contribution, adding that he was “extremely proud” of their effort. He further noted that Chief of Staff of the Barbados Defence Force, Colonel

He further noted that Chief of Staff of the Barbados Defence Force, Colonel Glyne Grannum, was also “taken back and impressed” by the response from the volunteers. “The success of TRADEWINDS is in no small part up to the volunteers and their effort…,” he maintained.

Major Lovell said while the Secretariat had originally made a call for 1,200 volunteers, only close to 800 signed up. However, he said that number was more than enough to allow members of the forces to stage a realistic exercise.

“The reason why we wanted so many volunteers is because if Barbados is impacted by a natural hazard everybody is going to be impacted. The more persons we can have volunteering as role players during an exercise, the more realistic the exercise will be. That is actually what happened,” he noted. 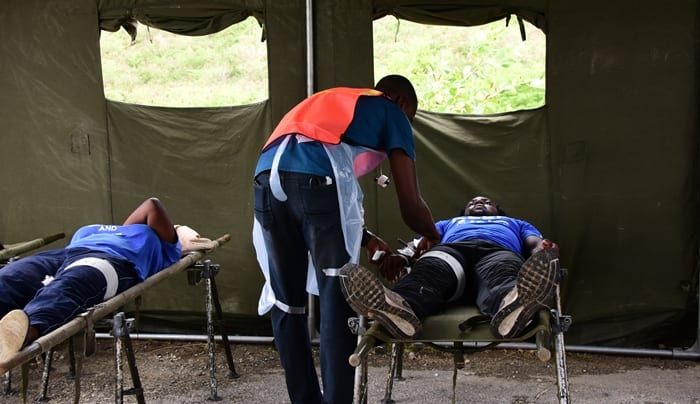 A Tradewinds volunteer being ‘examined’ by medical personnel during a search and rescue simulation at Less Beholden, St. Andrew last Sunday. (C.Pitt/BGIS)

The CECG Director added that the exercise sponsors, the United States Southern Command, were also generally pleased with the conclusion of the Barbados leg of the exercise, particularly the all-inclusive model used this year, which focused on Countering Transnational Organised Crime and Humanitarian Aid Disaster Response.

He further noted that the initial postmortem revealed that the exercise did not come off perfectly as it had its share of real-world and exercise challenges, some of which were planned and some which were not.

“The good thing about those weak areas or areas for improvement is that they highlight, should there be an actual situation, where we need to improve or focus our efforts at improving,” Major Lovell remarked.

Exercise TRADEWINDS 2017 was held under the theme: A Seamless States Partnership for a Secure Region, and will conclude in Trinidad on Saturday, June 17.