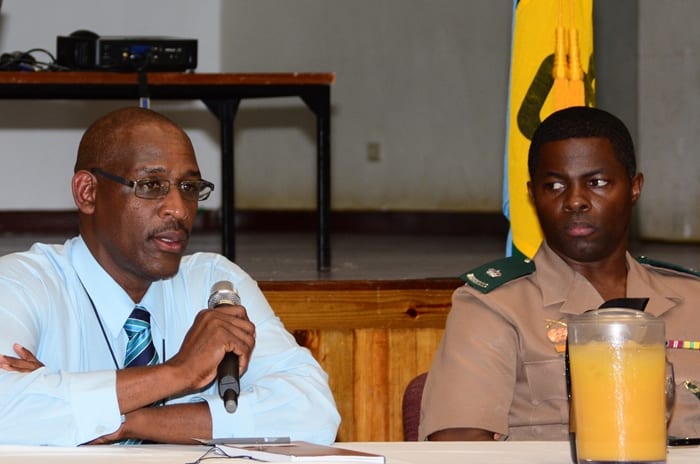 Barbados’ emergency forces and their ability to interact with regional and international forces during a disaster or security threat will be fully tested during Exercise Tradewinds 2017.

And, Host Nation Co-Director, Major Carlos Lovell, has promised that the scenarios planned for the June 6 to 12 exercise will be “very complicated”.

“The 6th to the 12th of June sounds like a very short time but a lot can happen in six days, and a lot will happen in six days. We will be addressing threats to the region and Barbados associated with transnational organised crime, and all of these things will lead up to the exercise during the course of that week,” he said.

Speaking during the first of two town hall meetings to create awareness about the exercise at The Lester Vaughan School recently, Major Lovell said the island’s

National Emergency Management System, in relation to the disaster management phase and the security response mechanism, would be tested. That, he pointed out, would allow officials to identify those areas which worked perfectly, and those which needed to be improved.

He explained that the exercise would be captured by the Regional Observer Assessment Team’s (ROAT), and a report would be presented during the After Action Review in Miami. “That report would highlight the areas where they excelled and those where they need improvements,” Major Lovell said.

Major (retired) of the Regional Security System (RSS), Jeffrey Forde, also noted that the RSS was preparing to exercise how it mobilised to move military, police and maritime units to Barbados to render assistance.

“The scenario is such that the resources in Barbados are overwhelmed,” he said, stating that the RSS’ role was to mobilise troops and deal with evaluation. He added that lessons learnt this year would be incorporated into future Tradewinds exercises.

“I would like us to get to the stage where we can evacuate an entire village and not just a community to stretch our resources,” he said.

Station Officer with the Barbados Fire Service, Henderson Patrick, also noted that Exercise Tradewinds 2017 would allow its stakeholders to develop their skills, as well as provide an opportunity to examine the Standard Operating Procedures of agencies with a view to seeing how they could be improved.