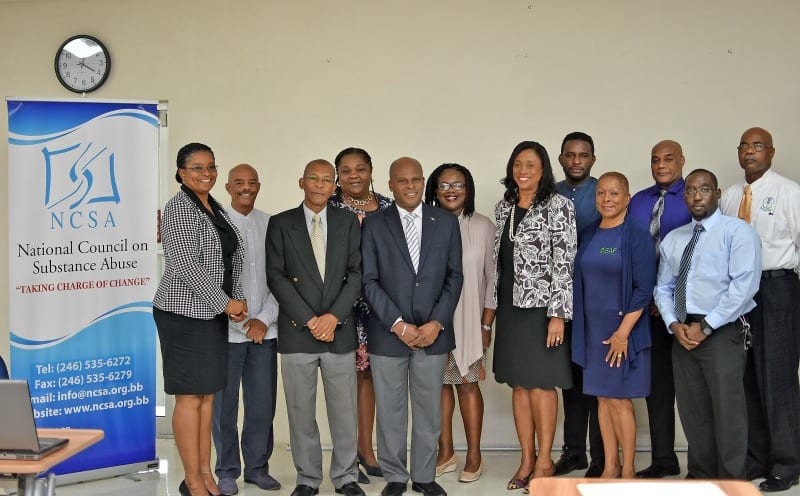 Minister of Home Affairs, Edmund Hinkson, standing among the members of the new NCSA board. (Missing is Deputy Chairman, Beverley Lashley). (C.Pitt/BGIS)

Even though Government is giving consideration to decriminalising marijuana in Barbados, the way forward will be based on available evidence and best practice.

This point was reiterated by Minister of Home Affairs, Edmund Hinkson, as he addressed the first meeting of the new board of the National Council on Substance Abuse (NCSA) last Friday.

Mr. Hinkson said from his discussions with officials at the NCSA, it was clear that the challenge of preventing drug abuse, both legal and illegal, had not diminished.

“I am advised that the perception of harm among school children is now so low as to be a major driver in the increasing acceptance of the use of drugs,” he stated.

He added that the general feeling on the ground was that younger children were getting involved in illegal drug use.

However, he stated that he was aware that the Council is exploring establishing an Early Warning System. “This augurs well for building out a National Observatory on Drugs which is essential in determining the threats to Barbados posed by substance abuse,” Mr. Hinkson noted.

He also urged members of the Board and staff of the NCSA to be the “eyes and ears” in the public for developments which might impact their work, and share their observations to assist with the development of programmes and interventions.

Mr. Hinkson said he was aware that a report of the Marijuana Commission was prepared and expected that, and previous work done by the NCSA to be reviewed in order to guide the process forward as it related to decriminalising marijuana.

“It seems therefore, that considerable effort needs to be expended in providing the best education and information possible surrounding drug use so that persons can make informed choices about this contentious issue,” he said.

He added that from a policy perspective, it was also important to accurately measure the problem, its social and economic impacts and the cost of any proposed responses in order to fashion appropriate policy responses.

“I have already spoken with the Manager [of the NCSA] with regard to allocating the necessary resources to ensuring that the NCSA’s own financial affairs are in order. The matter of maintaining current financial reports as per Government’s Financial Rules is to be regarded as a priority for this Board,” Mr. Hinkson stated.

The Board is chaired by Hadford Howell, while the Deputy Chair is Beverley Lashley.