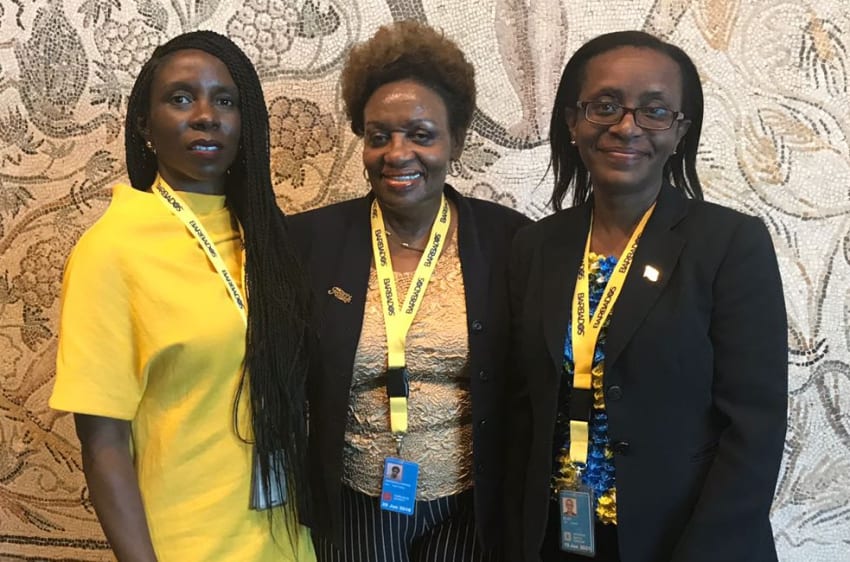 Faith Marshall-Harris (centre) being congratulated by First Secretary at the Permanent Mission of Barbados to the United Nations, Kereeta Whyte (left) and Chargé d’ Affairs, Juliette Babb-Riley (right) on being elected to the Committee on the Rights of the Child. (MFAFT)

Barbados has secured a seat on the Committee on the Rights of the Child (CRC) for the term 2019 to 2023 through candidate, Faith Marshall-Harris.

The Ministry of Foreign Affairs and Foreign Trade has confirmed that Mrs. Marshall-Harris secured one of the nine vacant seats, following today’s elections at the 17th Meeting of States Parties to the Convention, held at the United Nations Headquarters in New York. Thirteen candidates contested the elections.

The Ministry and its overseas Missions played an integral role in the lobbying process to secure a place for Barbados on the CRC.

Mrs. Marshall-Harris is an Attorney-at-Law and Legal Consultant. Her vision includes promoting free and compulsory primary and secondary education for all children and ensuring children have access to justice and are protected from abuse.

Tags: children's rights, Committee on the Rights of the Child, Faith Marshall-Harris, Ministry of Foreign Affairs and Foreign Trade