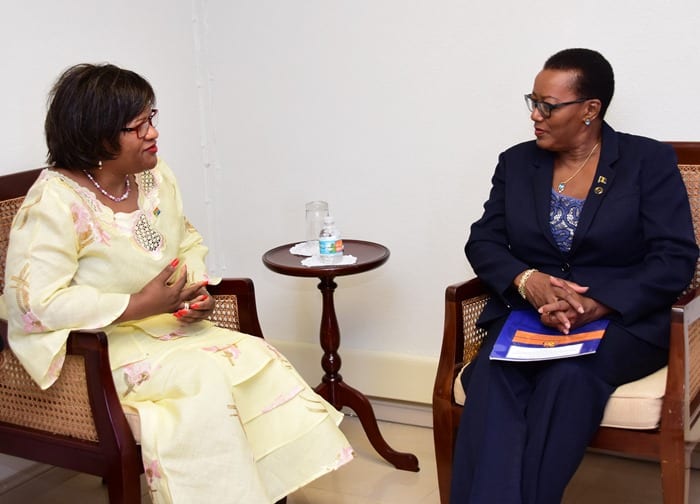 Minister of Foreign Affairs and Foreign Trade, Senator Maxine McClean and South Africa’s High Commissioner to Barbados, Xoliswa Nomathamsanqa Ngwevela chatting about the great potential of a relationship between South Africa and the Caribbean. (C.Pitt/BGIS)

High Commissioner-Designate of the Republic of South Africa, Xoliswa Nomathamsanqa Ngwevela, believes that there is a lot of potential between the African and Caribbean regions and that it was important “to have some kind of presence” in the Caribbean.

She explained that South Africa strived to demonstrate its African solidarity in the region with the use of its missions.

Senator McClean agreed that Barbados shared similar views and stated that “it is very critical” to have a presence in South Africa.

She added that Government was currently working on pursuing this and was hoping to explore the possibility of a non-resident advisor to South Africa.

During their meeting, both parties discussed air travel, climate change, Brexit and the Commonwealth, as well as exchange opportunities for university students, among other areas, for possible bilateral relations.