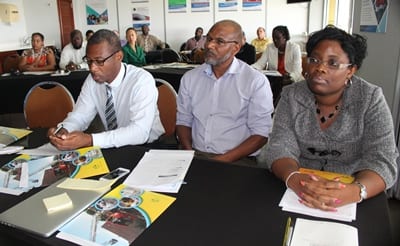 The flow of information will continue where possible in the event of a natural disaster as media houses have announced that they have contingency plans in place.

And, while some have admitted to not testing those plans to their fullest extent, media managers have given the assurance that consideration was given to alternate locations in the event that their regular place of work becomes inundated.

This was revealed on Monday during a tabletop exercise designed to test the operational readiness of media houses in times of crisis, in the ICBL Suite at Kensington Oval.

The exercise formed part of the ongoing training of the Public Information and Education Standing Committee of Emergency Services, which is hosted by the Department of Emergency Management (DEM) and chaired by the Barbados Government Information Service.

Editor-in-Chief at Nation Publishing, Roy Morris, noted that the organisation had plans in place for a “news room in box” given the vulnerabilities of its Fontabelle, St. Michael location. Those plans, he said, involved having off site locations for the organisation’s relocation if necessary.

Programme Manager at Starcom Network, Ronald Clarke, noted that his organisation also had plans in place to allow them to remain on air for as long as possible in the event of a disaster.

However, they raised concerns over the legal rights of media personnel during a disaster, particularly as they related to the Employment Rights Act.

Other concerns raised included members of the public understanding the information that was disseminated; the speed at which information reached the public; the need for concrete action plans and a blueprint for communication.

Meanwhile, Acting Director of the DEM, Kerry Hinds, challenged media managers to see themselves as leaders in charting the path for effective disaster management within their organisations, and to ensure that all staff members were aware of emergency plans.

“It is not enough for one person to know the plan and the other people not to know. It is all part of the process,” she said, stressing there was also a need for post- disaster and backup plans.

Ms. Hinds challenged them to look at their internal plans and procedures, test them and treat to any gaps which they may discover. “Look at what is the smallest change that could make the biggest impact on the system right now,” she said, noting it was time for a solutions-based approach.

The Acting Director stated that it was not about the media reporting the facts first during an emergency, but about how they could strategise and operate within their own environments during a disaster to better inform the public.

During the exercise conducted by Police Inspector, Fred Clarke, the media explored three scenarios which included hurricanes, earthquakes and tsunamis.

“Plans are not designed to remain on the shelves,” he said, noting the exercise was designed to allow media managers to see where their plans were at and if they could be operationalised easily.