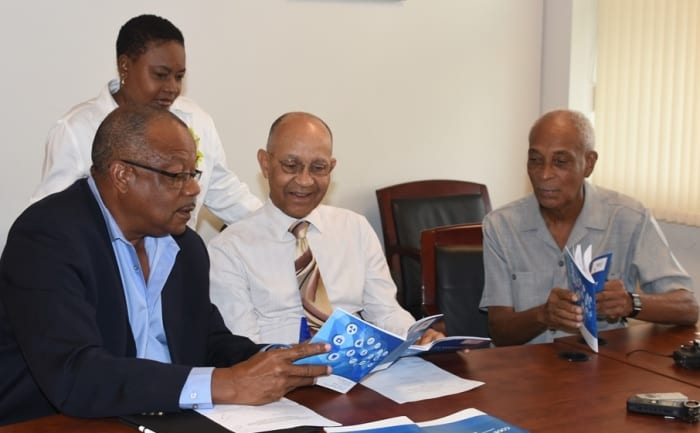 The Barbados Medical Council today launched a Code of Conduct for medical practitioners and specialists registered in Barbados.

Speaking to the media at a briefing at the Ministry of Health, Minister of Health John Boyce described the document as a significant milestone in the management of healthcare delivery in Barbados.

He said the Code of Conduct would serve as a framework for ethical decision-making within the Medical Council and as a communication tool that indicated to stakeholders “a coming of age of the Barbados Medical Council”.

Noting that it was important that medical practitioners were informed of the expectations of their governing body and of acceptable behaviours, he added that they must also be held accountable for their actions.

“A standard of conduct acceptable to the Barbados Medical Council, the Barbados Association of Medical Practitioners, the University of the West Indies and the wider public must be maintained by practising physicians. This can only be done through adherence to a set of rules and principles that the Council considers significant and fundamental to successful operation,” Mr. Boyce submitted.

The Health Minister said he would like to see more documents of this kind governing the conduct of providers and recipients of health care in Barbados, including the nursing profession and paramedical disciplines.

He praised former chairman of the Barbados Medical Council, Professor Sir Errol Walrond, for his sterling contribution to health care in Barbados, and in particular, for the tremendous amount of work he did on the Code of Conduct during his tenure as chairman.

Minister Boyce also acknowledged the Arnott Cato Foundation, which is chaired by Sir Errol, for its financial contribution to the printing of the document.

Sir Errol expressed his pleasure at seeing the project come to fruition, describing the Code as a very important initiative for the medical profession.

In the introduction to the document, Sir Errol stressed that observance of the principles contained in the document were particularly important when dealing with sick or disabled people and their relatives, who in their time of need might be anxious and vulnerable to exploitation, abuse and neglect.

Current chairman of the Barbados Medical Council, Dr. Charles Edwards, also welcomed the publication, noting that it was a requirement of the Medical Profession Act 2011.  He praised the work done by Sir Errol and the committee, and promised that the Code would be disseminated to all medical practitioners.