Men Urged To Pay Attention To Their Health 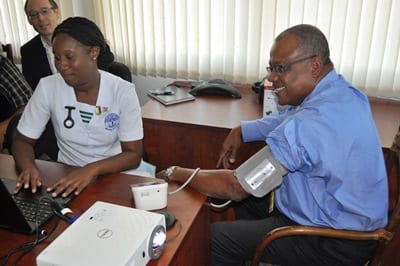 Health Minister John Boyce has called on Barbadian men to adopt a more holistic approach to the management of their health.

Speaking at a dinner and awards ceremony to celebrate the 10th anniversary of the Randal Phillips Polyclinic’s Men’s Health Group last Saturday, Mr. Boyce stated: The Ministry of Health has long recognised that there is poor health-seeking behaviours among men compared to women…

“It is well known that men in our society are socialised to be strong, and showing emotions like crying and sadness are signs of weakness. As a result, men often delay seeking medical assistance and tend to engage in self-destructive behaviour, such as domestic violence, substance abuse, tobacco use, excessive alcohol intake and irresponsible sexual behaviour.”

Noting the impact of chronic non-communicable diseases on the gender, he disclosed that data for 2013 revealed that prostate cancer accounted for the highest proportion of death in men.

According to the Barbados National Registry, men were also at particular risk for stroke and heart attack, primarily due to risk factors such as tobacco smoking and hazardous consumption of alcohol.

The Health Minister lauded the Randal Phillips Polyclinic’s Men’s Health Group for “its tireless efforts” in promoting the health and social development of the men in the Christ Church community where it is based.

He maintained: “The role played by the men’s health groups established at the various polyclinics across Barbados is vital to the achievement of my Ministry’s vision to empower the Barbados population to achieve optimal health in a society that encourages individuals, families and communities to take greater responsibility for their health.”

He said that while he was encouraged by the progress made so far with respect to men’s health and awareness since the introduction of the first men’s health group at the Maurice Byer Polyclinic in 1999, his wish was for men to emulate women “and utilise the various facilities available nationally for early screening and detection of non-communicable diseases.”

Mr. Boyce concluded that prevention, awareness and treatment were essential to a healthy lifestyle, and Government was committed to implementing programmes to strengthen the quality and delivery of primary health care, along with increased emphasis on preventable health care.