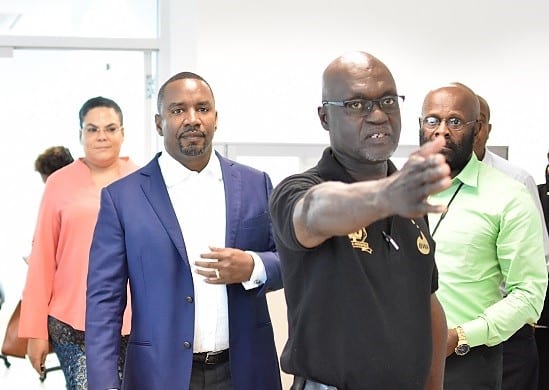 Minister of Energy and Water Resources, Wilfred Abrahams, being led by Project Manager at BWA, Stephen Lindo, and accompanied by Chairperson of the BWA’s Board, Leodeane Worrell and Director of Human Resources at BWA, Tyrone Applewhaite. (C. Pitt/BGIS)

Minister of Energy and Water Resources, Wilfred Abrahams is pleased about the work and social climate within the Barbados Water Authority.

He made this known after a tour of BWA Headquarters at the Pine Commercial Estate, The Pine, last Friday.

“During my tour of this expansive facility, I was heartened to note that staff here are like family, not only do they work together to achieve the goals of the organisation, but they also socialise together frequently,” he stated.

Also on the guided tour by Project Manager, Stephen Lindo was the BWA’s new board members, as well as senior management officials.

Mr. Abrahams also stressed: “One thing that struck me as Minister responsible for energy is the lack of energy efficiency practised or enabled throughout the complex, and I intend to change this as soon as possible, in keeping with our goal as a country to be the number one green island economy by 2030.”

The complex, which was built two years ago, cost an estimated 70 million dollars to construct. It is under a rent to own agreement, and can remain operational for up to 72 hours in the event of an electrical blackout.  It consists of eight buildings, including administration, procurement, training, cafeteria, the rapid response unit and transport.  The complex also has a sports club and gym.

A child after care programme will soon be implemented, where the children of staff will be accommodated after school hours.