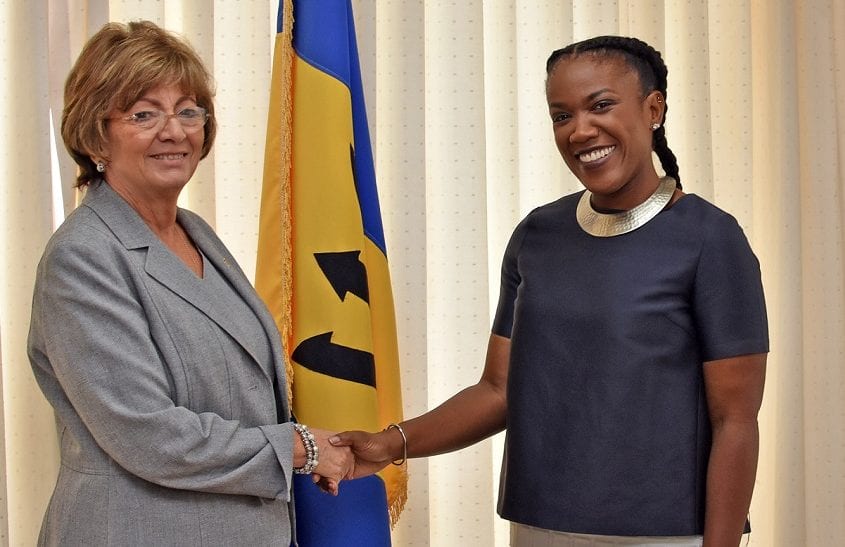 Investor confidence in Barbados is gradually being restored and the country is attracting a lot of interest from financiers.

This disclosure came from Minister in the Ministry of Economic Affairs and Investment, Marsha Caddle, when the United States of America’s Ambassador to Barbados, Linda Taglialatela, recently paid her a courtesy call at the Warrens Office Complex.

Stressing that the Barbados Economic Recovery and Transformation Plan shows that Barbados is open for business, Ms. Caddle said that key to that Plan was the removal of needless bureaucracies and obstacles to doing business.

“We are setting benchmarks for the processes involved, not only in setting up a business, but the day-to-day things that allow people to easily go about their lives. Getting a response to a building application, transferring property, paying taxes, getting an electricity connection, having a matter heard in court: these affect the ease of setting up and doing business.

“People need to be able to predict not just the time it will take but that the rules will apply equally to all. This all affects investment climate, and as a result of our efforts, people are starting to trust that Barbados is open for business again, and not just open, but open in a fair and transparent way,” the Minister stated.

Ms. Caddle noted that while Barbados was executing an adjustment programme, it was not just about adjusting and recovering but about transformation.

“It is one thing to adjust and recover but we have to grow our way out of this crisis. So, we are applying renewed emphasis to executing those public sector projects on roads, water and social well-being that were allowed to stagnate, but also to bring in private sector investments.

“It is the private sector, not Government, that grows, but our role as Government is to facilitate that growth and make sure that all Barbadians can participate. We are shifting the pillars of growth in the economy, so that tourism remains a mainstay, and that new sectors emerge in maritime, medical and education services and other high-skilled, knowledge-based sectors. We are shifting to a model of economic enfranchisement so people can be shareholders in companies that provide key services, can start their own companies, can acquire new skills and therefore earn at higher levels,” she stressed.

Ms. Caddle said that another key part of investment facilitation was making Barbados clean: both physically clean and as a model of integrity. She also noted that climate resilience, renewable energy and environmental sustainability were all related areas of work occupying Government’s attention, in particular becoming fossil fuel-free by 2030.

During the wide-ranging discussions, the Minister underscored the importance of investing in renewable energy, saying it would give Government much more fiscal space as it would not have to expend precious foreign exchange in an environment of rising fuel prices.

“Some of our entrepreneurs in the sector are among the best examples of the kind of experimentation and ingenuity that we want to encourage in this country at this time. From biofuel to electric to solar, the ground is fertile for development across this sector, and indeed across Barbados,” she surmised.

Ambassador Taglialatela has been visiting various Ministers to ascertain the priorities of the Ministries and share what the US has been doing here and in the region.