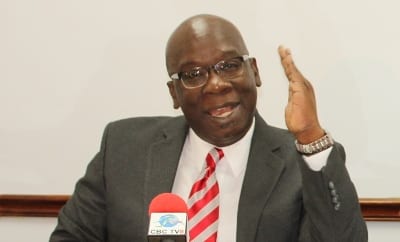 Education Minister Ronald Jones is defending this country’s educational standards against any suggestion that they are not at the same level as before.

Speaking yesterday at the Warrens headquarters of telecoms company FLOW as it launched Flow Study, an e-learning tool, Mr. Jones said much of the current discussion came from the “ill-informed” and the “uninformed” relative to what is taking place in Barbados.

Responding to a question on whether the country was still at 99 per cent literacy rate, the Education Minister said Barbadian young people and students continued to be “quite excellent in our school system”.

Mr. Jones said he was pleased to see their academic and technical vocational progress, and stressed: “Sometimes, I become bothered about how they learn… the time they spend in learning is a lot less than what I would have spent in learning but yet the outcomes or the output are a lot more substantial… that is what we experience and that is what we see…”

Intimating that he would soon speak to this matter, the Minister said sometime this week he would meet with persons and share the data that “we have over the last 23 years to show the movement upward in the learning of our students”.

Mr. Jones said the island had shown a very interesting profile at schools, where students were achieving between 98 and 100 per cent of four subjects or more, in one year in the CSEC May/June.

Other students, he noted, were also in accelerated programmes in some schools, achieving passes in between one and three subjects, before fifth form.