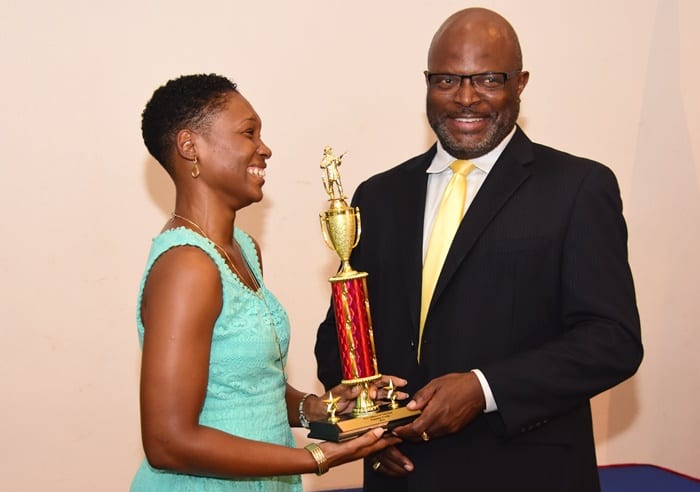 Attorney General and Minister of Home Affairs, Adriel Brathwaite presenting the Fire Officer of the Year Award to Fire Prevention Officer, Natasha Forde, during a ceremony at the Accra Beach Resort and Spa on Thursday. (C.Pitt/BGIS)

A heightened interest in firefighting by the public and the training of 10 auxiliary Fire Officers were among the successes achieved by the Barbados Fire Service (BFS) over the past year.

Minister of Home Affairs, Adriel Brathwaite, highlighted the department’s achievements while congratulating Fire Officers who received awards during a ceremony and cocktail reception at the Accra Beach Resort and Spa on Thursday night.

One success, he said, was the completion of training for 10 auxiliary Fire Officers, in conjunction with the Barbados Community College, to complement the existing numbers.

Noting that Barbados’ legislation made provisions for auxiliary Fire Officers to be included, Mr. Brathwaite said there were 75 additional applications to the BFS waiting to be processed.

He added that while the issues surrounding promotions in the BFS were still outstanding, provisions were being made in the Estimates for the next financial year for increased emoluments with the expectation that they will be resolved.

At the same time, the Minister assured Fire Officers that Government was doing all in its power to address their physical environment.

“I would say to the Fire Chief, ‘you spend more time at work than you do at home. Work should always be a place that persons want to come to’. [So] I charge the Fire Chief and the management of the Barbados Fire Service to ensure that people look forward to coming to work,” he said.

Mr. Brathwaite also described the procurement of two new tenders, and the expected arrival of two additional units, as part of a plan to refurbish the fleet over a three-year period.

He added that another success was the refurbishment of the Arch Hall Fire Station into the Barbados Fire Academy, despite challenges with moving into the building. “Our idea is that we want to be the teaching centre of the Eastern Caribbean…. We want you to make Arch Hall a profit centre in its own right.

“We are going to provide you with the space and with the tools and machinery so that we would not only as a country be the leading fire officers, but we will bring along our brothers in the OECS (Organisation of Eastern Caribbean States). So I mark that off as a success for the year,” Mr. Brathwaite declared.

The Home Affairs Minister congratulated the Fire Officers for a job well done over the year, and for their hard work and dedication.