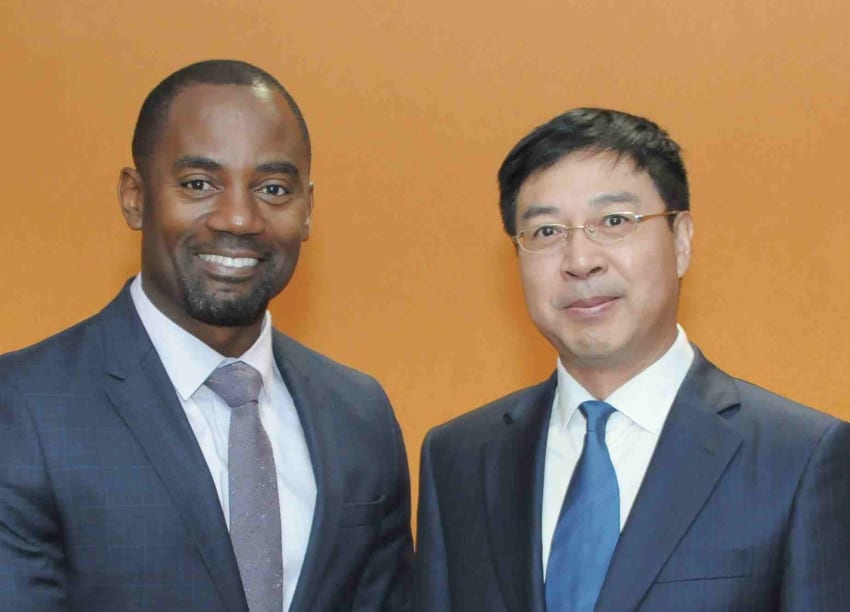 Minister of Maritime Affairs and the Blue Economy, Kirk Humphrey, wants to see a greener and bluer Barbadian economy.

This, he said, would involve the island becoming the centre for seafaring across the Caribbean, an end to overfishing, and greater protection mechanisms put in place to guard the coral reefs.

Mr. Humphrey shared these views during a courtesy call with the Chinese Ambassador, Yan Xiusheng, who was accompanied by his Political Counsellor, Zou Xi, and Attaché, Hu Qiushi.  Permanent Secretary in the Ministry, Esworth Reid, and Chief Technical Officer, Jacqueline Blackman, were also present.

The Minister pointed out that he is of the view that the island could do much more for its seamen in a number of areas, including boat building and in becoming seafarers.

He, however, lamented the condition of the fish markets, some of which, he said, were in a derelict state and in need of upgrades, and the need for training for those engaged in the sector and for more oceanographers.

Mr. Humphrey also noted that the technology on fishing boats and the conditions of some harbours were also in need of upgrades. He further expressed concern that Barbados presently imported 80 per cent of the fish consumed locally, and the sector was affected by overfishing.

“We have fallen down in fisheries…We overfished… What we want to do now is create safe spaces and protect the reefs and find a way to manage that,” Mr. Humphrey said, stressing that a greener and bluer economy for Barbados was desirable.

To achieve this, the Minister shared that Government was seeking to create more marine protected areas in an effort to preserve the island’s coral reefs, which were dying at a rate of 20 per cent worldwide, and at 50 per cent throughout the Caribbean.

He explained that the Ministry was presently in the process of building out its strategy, and there was a desire to capitalize on the island’s sea space, which was 400 times greater than its land space.

In response, the Ambassador said Barbados and China could have a “good exchange” as the latter was rich in its marine resources, which stretched for approximately 18, 000 kilometres.

He added that China’s blue economy generated an average of US$1.22 trillion a year, and that figure was expected to increase to US$1.4 trillion by the year 2020.

Mr. Yan added that the Ministry of Natural Resources of China was established in March this year. “We have a five-year plan spanning from 2016 to 2020.  The strategy speaks to the need to build China into a strong maritime economy, and make way for a blue economy,” he said.

He explained that the plan for the blue economy also sought to erase the pressure on the marine ecological environment, as it introduced new dynamics such as sea water desalination and other new and emerging industries.

Ambassador Yan also noted that attention was being paid to protecting China’s marine ecology, and 20 marine zones had already been established.