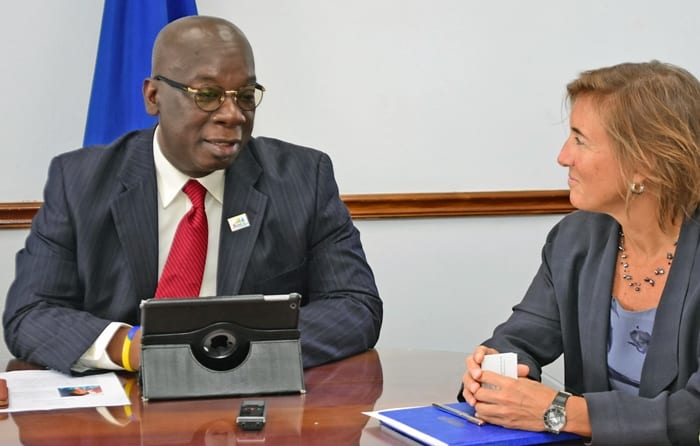 The success of programmes ongoing with Canada, and the Education Ministry’s future plans, were the focus of discussion, when Canada’s High Commissioner to Barbados, Marie Legault, called on Minister Ronald Jones recently at the Elsie Payne Complex.

“Barbados carries a very large financial sector, a lot of it fuelled by Canadian financial business and that helps fuel the Barbadian economy. We know that there have been changes taking place but we still continue to survive. The banking sector (the Bank of Nova Scotia, Royal Bank of Canada) are all part of the Barbadian financial and economic framework, and for that we are glad,” the Minister said.

Tasked with discussing the future intentions of the Ministry, Permanent Secretary Chandler signalled to the High Commissioner that Barbados was seeking more collaborative arrangements between the University of the West Indies (UWI) and Canadian universities. This, she explained, was in a bid to move towards internationalisation and arriving at alternative means of raising revenue while reducing dependency on Government.

Pointing out that such arrangements were also welcomed with any other universities, she added: “My main thrust is to look at these collaborative efforts so as to grow our regional university, and, of course the spin off benefits that would redound to the economy of Barbados.”

Ms. Chandler commended the High Commissioner on efforts already in train with New Brunswick University, noting this was an example to be encouraged in order to aid the Ministry in developing its capacity, especially with respect to special needs education.  Moreover, she added, Canada could also benefit from an exchange of staff to see how Barbados “does things in the classroom”.

The High Commissioner said she was pleased with the programmes already in place with Barbados. Alluding to an arrangement between Colleges and Institutes of Canada and the Barbados Community College which began five years ago, she added her country was also funding a programme at UWI Open campus to the tune of $20 million.