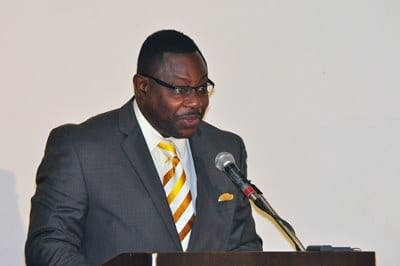 Minister of Social Care, Steve Blackett, has lauded UNICEF for the crucial role it has played, and continues to play, in defending and protecting children across the world.

The Minister shared this insight on Wednesday, while addressing a rally and consultation to celebrate the organisation’s 70th Anniversary.

Mr. Blackett explained that UNICEF was established in 1946 by the United Nations to safeguard the lives of children struggling to survive in the aftermath of World War II, but the many “hot spots of conflict which afflict the world today” should remind persons why the organisation continues to play a crucial role.

“Over the past 70 years, UNICEF has been in the vanguard of defending the legitimate rights of the most vulnerable children across the globe, without regard of economic status, gender, race or religion.  Indeed, it cannot be gainsaid that UNICEF has been the champion of children who have experienced social dislocation due to conflict, disease, exclusion and other forms misfortune,” he stated.

Speaking to the region’s relationship with UNICEF over the years, he reported that while the environment for children in the region is “not one of devastating conflict”, the relationship between UNICEF and the children of the region has been mutually beneficial.

“I can therefore readily identify with your theme for the 70th anniversary which is: For Every Child, Hope. The concept captured by the theme is [also] in keeping with my Ministry’s vision and mission: to transform our socio-economic landscape; to provide improved and equal opportunities for all citizens; and the preservation of a sustainable standard of living allied with an enhanced quality of life,” he noted.

Mr. Blackett welcomed all the representatives gathered, and said he hoped that everyone’s contributions to the consultation would be instrumental in further developing a programmatic policy platform for Barbados’ social sector.