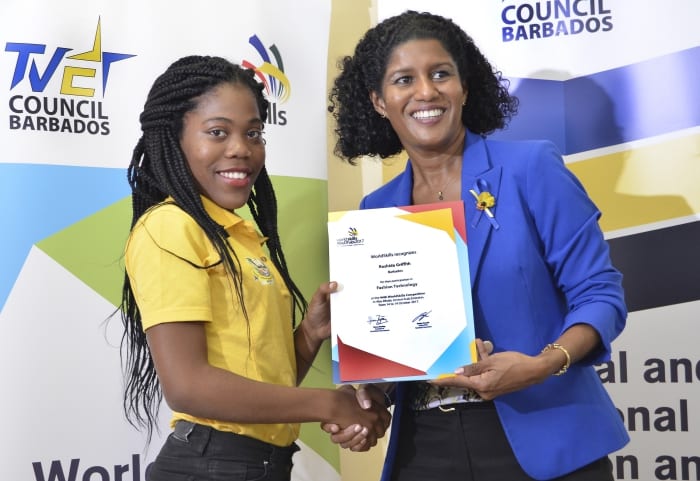 Minister of Labour, Social Security and Human Resource Development, Senator Dr. Esther Byer Suckoo, has praised the efforts of those who participated in the World Skills Barbados competition in Abu Dhabi in September.

She heaped accolades on their achievements last Friday during a presentation ceremony and media briefing at the Technical and Vocational Education and Training Council’s (TVET) headquarters, Hastings, Christ Church.

Senator Byer Suckoo said the exposure in Abu Dhabi was a good indication as to what Barbados had to compete against and the TVET Council was now in a better position to carry out their role on TVET training.

“You have heard [TVET Executive Director] Mr. Eastmond say several times that there is a need for policy.  It was fortuitous that this organisation was able to go to Abu Dhabi and see for themselves because the responsibility is at the TVET Council to articulate what has to happen in a TVET policy and all those things that are needed…,” she stated.

The Senator told the competitors, and the experts that the being exposed to the best the world had to offer, was a valuable experience for the participants as they competed against others in areas such as hairdressing, fashion technology, cooking and automobile technology.

“You have learnt a lot…you have carried our flag and you have shown the world that there is a country called Barbados that actually does know a thing or two.  We might not have medalled but…you are the pioneers…you are the ones who have gone out there and everybody else now will have to follow in your footsteps,” she underlined.