Minister Speaks To Issue Of Vending At Schools 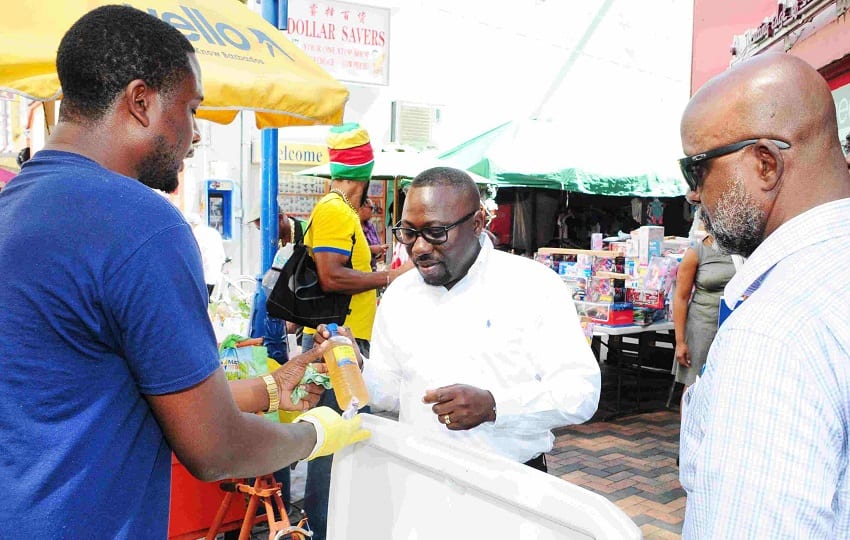 Minister of Small Business, Entrepreneurship and Commerce, Dwight Sutherland, buying a drink from a vendor while on tour of Swan Street yesterday. (B.Hinds/BGIS)

Minister of Small Business, Entrepreneurship and Commerce, Dwight Sutherland, has broken his silence on the issue of itinerant vending at secondary schools.

He was speaking to the media, on Wednesday, following a tour of Swan Street, where he had earlier interacted with a number of street vendors and store owners.

In an apparent reference to the recent issue at the Grantley Adams Memorial School in Blackman’s, St. Joseph, that saw students protesting against the offerings of the school’s canteen, he said: “I don’t think that one canteen can serve all of the students at a school.”

Recalling his own secondary school days, Minister Sutherland added: “I went to Lodge School; I bought a number of my ham-cutters, cheese-cutters and drinks from the vendors because some days I went to the canteen … and, if I wanted to play cricket … I could not stand up in a canteen line for half an hour. I had to maximize my recreational time, and in order to maximize my recreational time I had to go to those vendors on the periphery of the school.

“So, what I would say though, and I know what is vending in modern Barbados as it relates to school, [is] the vendors now have to get on board with the nutritional value of vending.  So, as opposed to eliminating, we have to integrate and make sure that they provide nutritional value to the students. And, we have the space for all of them.”

He acknowledged that his colleague, Minister of Education, Technological and Vocational Training, Santia Bradshaw, had a plan to address the issue, and noted it would soon be executed with the help of BARVEN (Barbados Association of Retailers, Vendors and Entrepreneurs).

“So, we won’t see any more challenges around school vending and people getting put out. It is part of our culture,” Mr. Sutherland stressed.