Minister Supports Use Of Service Dogs 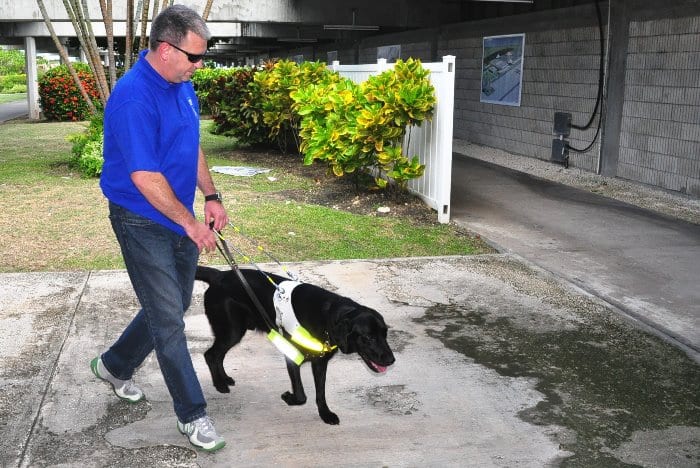 Minister of Education, Science, Technology and Innovation, Ronald Jones, believes that society needs to become comfortable with the presence of guide dogs.

The Minister intimated this today as he spoke briefly at the handover of equipment to aid students who are visually impaired, at the Irving Wilson School in the Pine, St. Michael.

Addressing philanthropist and Barbados Jubilee Honouree, Richard Phipps, Mr. Jones said he was quite pleased to see him with his guide dog.  Noting there were still some strictures here in relation to guide dogs, he said this was something which may have to change.

“In this society, we have to become more comfortable with the presence of dogs to assist those who can’t see or are vision impaired … They too have the right to participate in everything that this society and economy provide and if we are not having that present then there are obviously some difficulties…,” he stated.

Pointing out that he could see Mr. Phipps’ quality of life was enhanced as a result of the guide dog, the Education Minister stressed that such animals would be useful to helping visually impaired persons here, once there was the necessary patience and understanding from the society.

In response, Mr. Phipps said the challenges he encountered showed people needed to embraced guide dogs as these could certainly enhance the lives of others.

“Sometimes, individuals think of themselves as not having an impediment but others do. And, somebody in their specific family might have that challenge and I’m sure they wouldn’t want to deprive that person of the opportunity to move forward,” he said.

Stating it was important to first remove the fear which people had and then have them appreciate the unique difference between “dog” and “service dog”, Mr. Phipps explained that service dogs were trained for a specific purpose and time and their training programme was between $20,000 to $70,000 depending on whether their purpose was for medical or sight reasons.

The philanthropist challenged Mr. Jones to be a “voice” and “advocate” as the Education Minister.

Mr. Phipps was among those receiving the Barbados Jubilee Honour this week at Government House. The award was conferred on him in recognition of his outstanding work in advocating and promoting Barbadian arts, culture, education, and family values in the United States of America.

An active member in his Boston, Massachusetts, neighbourhood, he also promotes Barbadian arts, culture, education and entertainment by hosting Barbadian artists and a variety of different programmes there.