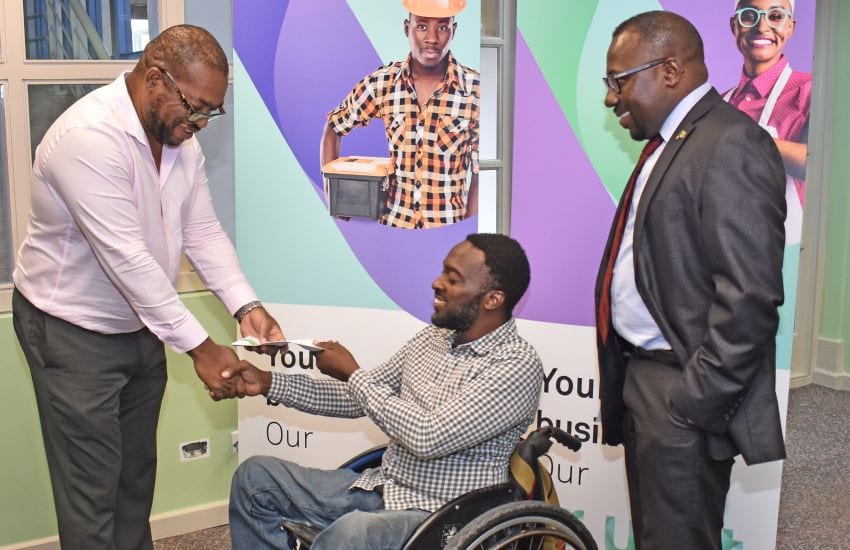 Manager of the Trust Loan Fund, Jerry Amos presenting a cheque to Junior Howell, owner of Irie Kids Graphic Art while Minister of Small Business, Entrepreneurship and Commerce, Dwight Sutherland looks on. Mr. Howell was the first person to have filled out an application form when the Fund officially opened its doors on October 31. (C.Pitt/BGIS)

Minister of Small Business, Entrepreneurship and Commerce, Dwight Sutherland, is satisfied with the efforts of the Trust Loan Fund thus far and aims to see it move in a digital direction.

He made this clear yesterday as the Fund’s Manager, Jerry Amos, disbursed the first set of loans to six recipients at the Fund’s headquarters at Building #4 Suite 102, Harbour Road, St. Michael.

Mr. Sutherland told media representatives that Government had made it their business to engage, re-employ and empower those persons who were laid off, some of whom are now working with the Fund.

Explaining further, he said: “What we did as the Trust Loan Division, as part of the Ministry of Small Business, Entrepreneurship and Commerce, is we made sure that we found persons who were laid off and we re-employed them within the Trust Loan Division. They were the first batch of persons to be spoken to and in turn recruited as we sought to provide the necessary staffing requirements to make this division function and function efficiently.

“So indeed, we are looking at the layoffs and we are indeed recruiting. Of course, we don’t have 500 jobs, but if we have six jobs we are making sure that we find the necessary skills to bring into the Trust Loan Division.”

Equally satisfied with the wide range of businesses he understood had come forward to benefit from the $5,000 maximum loans, the Minister said hairdressers were also included and would benefit shortly.

Noting that the next step would see the Trust Loan Fund moving in a digital direction, Mr. Sutherland said: “We believe that the time has come whereby when you operate digitally, you save money and indeed that is the next step. We have received our first batch of money in terms of $2 million so we can disburse our loan. But we don’t want to go to the second batch after we have exhausted the first tranche to continue utilizing paper. We want to move to a paperless system and indeed that’s our focus within the Ministry to ensure that we give these loans but we want to do it on a digital platform.”

He further noted that his Ministry was planning to help small businesses start the thrust towards advertising and marketing on social platforms. Responding to a query posed by media, he stressed: “Indeed, when we speak about Smart Bridgetown, I believe Smart Bridgetown is about commerce and small businesses and entrepreneurship…. We believe that is the way to go and in terms of it, we are working closely with the Ministry of Innovation, Science and Smart Technology and that is a project that will come on stream shortly….

“We are on our way to creating Smart Bridgetown …. in terms of building out small businesses and entrepreneurs and growing out this economy.  So, we will do it through an ICT platform and my next step within the Trust Loan Division is to move to a digital platform; so that is indeed Government’s focus for the next year.”