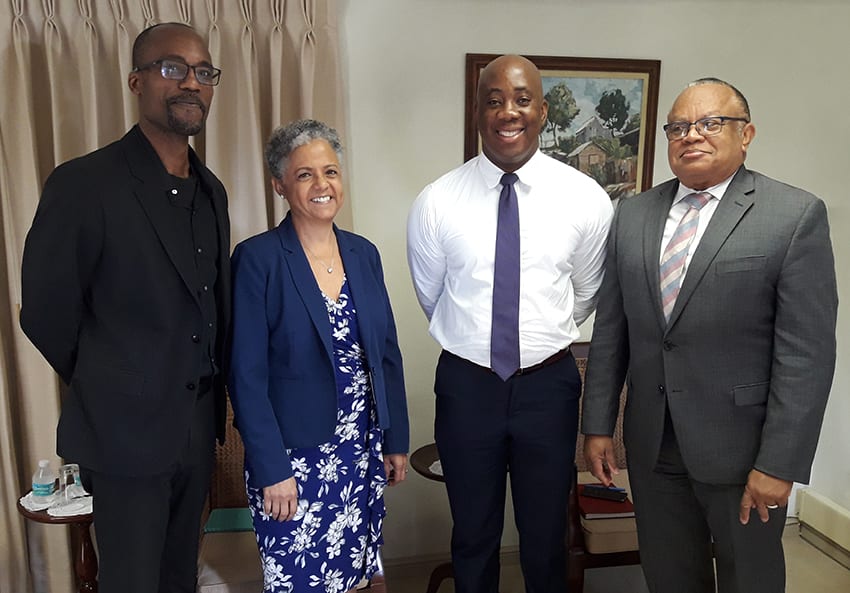 His appeal came during a recent courtesy call by President of the Barbados Chamber of Commerce and Industry (BCCI), Ezra Prescod, at the Ministry of Foreign Affairs and Foreign Trade on Culloden Road, St. Michael.

Mr. Prescod was joined by Vice President (Finance) of the BCCI, Betty Brathwaite, and Executive Director of the BCCI Secretariat, Carlos Wharton.

During the meeting, the Foreign Affairs Minister urged the BCCI representatives to encourage their members to explore regional business opportunities, especially in Suriname.

“We want business people here to go down to Suriname, which is moving swiftly. There have been initial discussions to establish air, sea and trade links and there is vast agro potential,” Minister Walcott said.

He reminded them that Prime Minister Mia Amor Mottley had officially visited the South American nation, which is a CARICOM member state, in November 2018, and signed an Economic Technical Cooperation Agreement.

The officials also discussed implications for the Barbadian business community based on decisions taken at the 47th Council for Trade and Economic Development Meeting, which was held in Guyana. This included change requests to the Rules of Origin for various CARICOM products.

In thanking the Minister for the meeting, Mr. Prescod explained that the BCCI thought it was critical to form a relationship with the new Government. He noted that this was important because lobbying was a part of their mandate, and BCCI’s executive directors and members have a wealth of knowledge on trade matters, which could be beneficial to Barbados.

Mr. Prescod noted that while it was commendable Government was moving at a fast pace, he cautioned the Minister to ensure standards were adopted and maintained. Minister Walcott said the meeting was useful and important for good governance and regional cooperation.