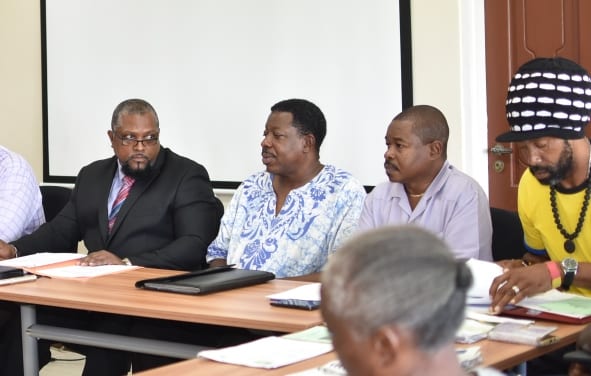 Minister of Agriculture, Indar Weir at a meeting with members of BARVEN, including President, Allister Alexander (second left), to discuss matters affecting the vendors. (GP)

Some of the issues affecting local vendors were recently placed on the table when Minister of Agriculture and Food Security, Indar Weir, met with members of the Barbados Association of Retailers, Vendors and Entrepreneurs (BARVEN) for the first time since taking up the portfolio.

Two of the main items on the agenda were the need to examine the current legislation as it pertained to vending and transforming the sector to help empower those operating in it.

“I have had conversations with… [Minister of Small Business, Entrepreneurship and Commerce], Dwight Sutherland, to see how we can address the issue with regard to the law, which seeks to criminalise certain aspects of vending, so as to allow vendors to participate as important business people in this country who contribute to Barbados’ economy. At the same time, it would give those vendors a chance to be part of the empowerment and enfranchisement programme that this Government will be carrying out,” Minister Weir told the members.

He said that some of the issues or concerns raised by vendors were currently being looked at and would be “addressed by the way of legislation”, and assured the group that the Ministry wanted to turn some of the challenges they faced into opportunities.

BARVEN President, Allister Alexander, told the Minister that the association was looking to develop vending but the biggest challenge it faced currently was street vending.

“BARVEN does believe that [street vending] is an important, historical aspect of our people and instead of getting rid of it, it [should] be kept. We have Historic Bridgetown and its Garrison. That cannot be just the buildings. We are talking about living heritage and the living heritage of Bridgetown are vendors; street vendors. We want to bring it to total order; enhance it and bring it to a look that would be the envy of the world,” he emphasised.

Mr. Alexander said that he wanted the way vending was perceived in Barbados transformed to the point where vendors were viewed as business persons. “We would like an entrepreneurial type of focus and understanding from Government. Vending, as far as I know, is the largest small business sector in Barbados. So, therefore, it has to be given that type of focus,” he maintained.