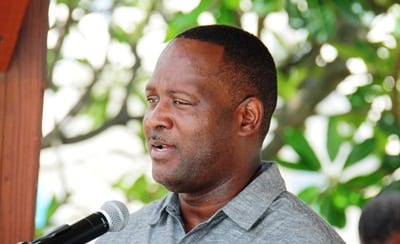 Small Business Minister, Donville Inniss, has made an impassioned plea to banking and financial institutions in this country to be more “lenient and understanding” of the micro, small and medium enterprise sector (MSMEs), when it comes to lending.

Before an audience which included Chief Executive Officer of the SBA, Lynette Holder; and Senior Fellow at the Sir Arthur Lewis Institute for Social and Economic Studies, UWI, Dr. Keith Nurse, Mr. Inniss bemoaned the fact that access to finances continued to be a “major challenge” to enterprise development in Barbados.

“I believe that there must be a serious conversation on the issue of “credit repair” to determine how best it may be used as a viable mechanism to mitigate the stigma associated with the high level of business failure among MSMEs, particularly in an environment where the shareholders of our financial institutions are, perhaps rightfully, increasingly demanding greater levels of scrutiny over their investments,” he stated.

The Small Business Minister said that he was aware that the modus operandi of some elements of the financial services sector was to invest largely in those areas that promoted their own economic viability.

However, he contended that it remained the corporate and social responsibility of these institutions, while not promoting a culture of mendicancy, but through a process of equitable, fair and reasonable due diligence, to be entrepreneurial in their efforts to assist such persons.

To this end, Mr. Inniss pointed out that preliminary discussions were being held between his Ministry and its strategic partners to determine how best the $50 million allocated for MSME development in the recent Budgetary Proposals could assist the many micro, small and medium enterprises within a reasonable time.

“Based on reports from a recent meeting involving the Ministries of Finance and Commerce, the Central Bank, the BIDC and Fund Access, I expect that the first set of additional funds will become available by January 01, 2017,” he disclosed.

The Minister added that he would continue to demand “the highest level of good governance” from those tasked with managing state agencies under his watch, which would be propelled towards “a higher point of self-sufficiency through greater efficiency and accountability”.